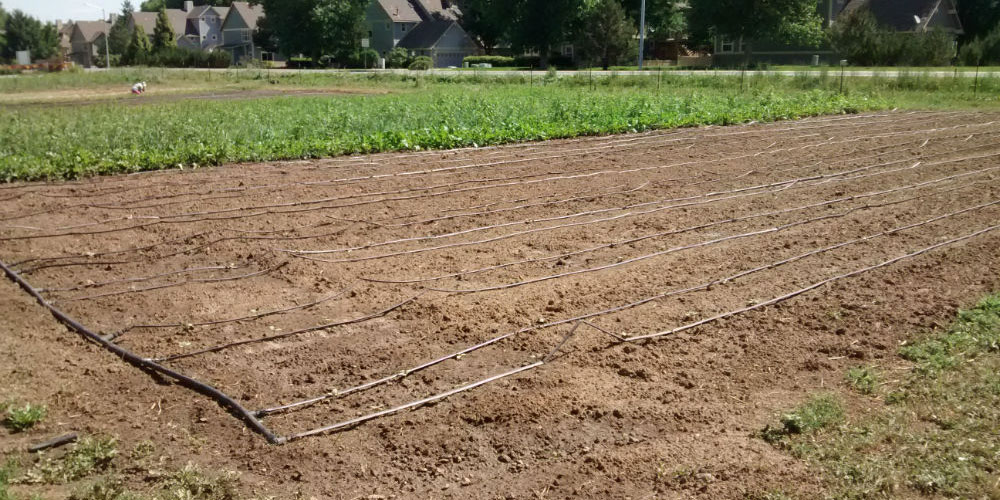 Researchers say climate change is already affecting Colorado farms and ranches – but not necessarily in the way people might expect.

Because the state is so dry, farmers here rely on irrigation to raise their crops. But they, and climate researchers, are less concerned about there being enough water than when that water is available. As Maeve Conran reports for our Connecting the Drops series, climate change means spring runoff is coming earlier, and that creates new challenges for farmers.

Mark Guttridge grows vegetables, herbs and flowers on Ollin Farms in Longmont in East Boulder County.   He is transitioning from spring crops to vegetables that will ripen in late summer and early fall.  Having water available later in the summer is crucial for Guttridge, but he knows from experience that that’s not guaranteed.

“In 2012 we were in a drought year and it got hot really early just like it did this year in June.  By the end of August, by the very end of August and early September there was hardly any water coming down there so we did lose crops on that side that year, all our winter squash didn’t have time to finish off so we lost a lot of winter squash and pumpkins that year.”

Guttridge uses a combination of ditch and municipal water on his 10 acres.  He has a safety net being hooked up to the municipal source…being able to turn on the faucet to irrigate his crops. But the part of the farm that relies on water being available in the ditch …that’s more vulnerable.  He needs that water to be available at the right time for his crops. But climate researchers like Jeff Lukas, Research Integration Specialist for Colorado and Wyoming with the Western Water Assessment, say that timing is changing.

“We have the most confidence that the annual cycle of snow melt and runoff continue to shift earlier.”

In 2014 Lukas led the revision of the WWA’s 2008 Climate Change in Colorado report to the Colorado Water Conservation Board. He says there has been  a trend toward earlier spring snowmelt and runoff over the past 30 years and those earlier shifts in the run off can be directly attributed to climate change.

“Run off will continue to shift earlier and then the low stream flows that we naturally get in late summer will also expand their season and so we’ll see even lower summer stream flows.”

“What we foresee is an increasing mismatch between the pulse of water coming downstream in the streams and river and the water needs of the crop over a longer growing season.”

Ollin farms in east Boulder County grows vegetables, herbs and flowers on 10 acres which it distributes through a CSA (Community Supported Agriculture) program and sells at its farm stand.

Taryn Finnessey, the Climate Change Risk Management Specialist with the Colorado Water Conservation Board says the timing of water is crucial if you look at it through the prism of Colorado’s prior appropriations water rights which gives senior water rights holders the ability to take water first.

But Finnessey says there may be some water users who will benefit from this shift.

“In climate change there are winners and losers and there are folks that by having an earlier runoff may actually see an increase in the water that they’re able to access because they will be more in priority and they’ll be able to pull more water from the river and I think there are others that will be on the losing end.”

Those senior water rights holders are often cities and towns who have ample storage to capture that early run off water. Kim Hutton, a water resources engineer with the City of Boulder says when snowpack starts to melt, the city starts filling its reservoirs.

“So how that works for Boulder, it actually may work to our benefit  in that the water supply is available and based on our water rights, we’re able to fill our reservoirs earlier in the season than we would be under today’s conditions.”

That ability to store water that is coming earlier in the season is crucial says Dave Eckhardt.  He’s the President of the Colorado Corn Growers Association and represents that group on the Colorado Agricultural Water Alliance.  As a fourth generation corn grower in La Salle Colorado, he has seen first-hand the changes in water resources in the state.

“I think it only brings to light the need for the ability to store more to retime the run off to keep water in the river.  Keeping water in the river is about the only thing that is going to keep ag in the state.”

But water storage itself is a complex issue. Some environmental groups have criticized plans for reservoir construction and expansion in the state citing its impact on ecosystems and river health.  Climate and water researchers like Jeff Lukas say reservoirs in and off themselves are not a solution to climate change’s impact on water resources.

“If stream flows not only shift in timing which we expect but also decline which is a very real possibility, then some of the contemplated reservoirs may not be filled reliably and serve their purpose.”

In other words, a reservoir is only useful if there’s water to fill it.  Climate change models predict not just earlier runoff but drier and hotter conditions, leaving all water users scrambling for diminishing resources.

Jeff Lukas, Research Integration Specialist for Colorado and Wyoming with the Western Water Assessment which is an applied research program at CU Boulder, part of CIRES.  In 2014, he led the revision of the WWA’s 2008 Climate Change in Colorado report to the Colorado Water Conservation Board

“We have the most confidence that the annual cycle of snow melt and run off continue to shift earlier. We’ve seen a trend toward earlier spring snow melt and run off over the past 30 years or so and the projected warming which we have very high confidence in means that that run off will continue to shift earlier and then the low stream flows that we naturally get in late summer will also expand their season and so we’ll see even lower summer stream flows.”

Kim Hutton is a water resources engineer with the City of Boulder. About 70% of the water that the city uses comes from surface waters falling as rain or snow in Middle Boulder Creek or North Boulder Creek, the remaining water comes from the Colorado River, Western Slope Water, which is also surface water, so 100% of the city’s water supply comes from precipitation falling as rain or snow.  Hutton says that due to the city’s storage capacity, they might be on the winning end of the equation with earlier snow melt.

“It actually may work to our benefit  in that the water supply is available and based on our water rights, we’re able to fill our reservoirs earlier in the season than we would be under today’s conditions.”