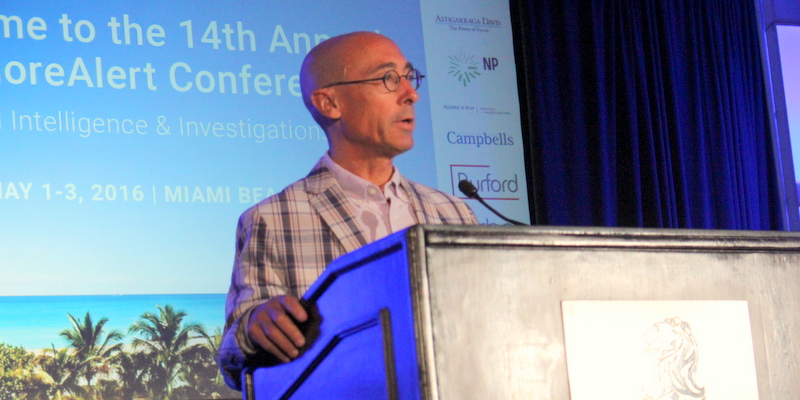 MIAMI-Joe Burgo, Ph.D. said he has been called arrogant and unprofessional for diagnosing presidential hopeful Donald Trump when he has never met him.  Burgo says, “I think that the reason people object is because they assume I’m using the word ‘narcissist’ the way everybody else uses it.  It’s a put down.”

But Burgo, the clinical psychologist and respected authority on Narcissistic Personality Disorder had years earlier profiled Trump in his book The Narcissist You Know based on Trump’s exhibited public behaviors that systematically follow the American Psychiatric Association (APA) definition of the personality disorder.  In the most recent American Psychiatric Association Diagnostic and Statistical Manual of Mental Disorders, the 5th Edition (DSM-5), nine criteria are listed as characteristic features elemental to a diagnosis of the condition.  Exhibiting five of these lead to the diagnosis of the disorder:

“You value yourself more than you value others, believes that he or she is special or unique, requires excessive admiration, has a sense of entitlement, has a grandiose sense of self-importance, is inter- personally exploitative, lacks empathy, is envious of others or believes they are envious of them, preoccupied or haughty, and is preoccupied with fantasies of unlimited success.”

Burgo compared typical bullying behavior in describing how the narcissistic personality might play out, “An understanding of bullying helps shed light on how and why an extreme narcissist makes use of other people to support their sense of self.”  In Trump’s case Burgo pointed to his childhood household and his upbringing as contributing factors to his extreme display of the disorder.  The expectation of perfection in Trump’s accomplishments as a child laid a foundation for the development of someone so competitive that he forged no bonds in military school.

An analysis of Trump’s language skills revealed a dichotomy in how Trump views others, namely as winners or losers.  Burgo gave examples of Trump’s self-assertions as a “winner” and his opponents as “losers” and demonstrated his point with a list that Trump has in the past referred to as “losers.” 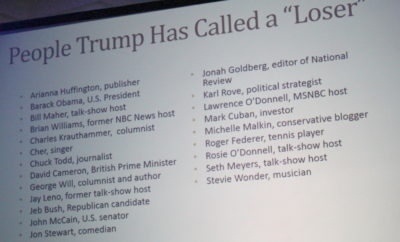 “The language of ‘winners’ and ‘losers’ permeates Donald Trump’s speeches.  For the extreme narcissist there are only two types of people:  winners and losers,” Burgo continued, “He’s constantly proclaiming himself a winner, denouncing others as losers.”

Trump’s public verbal assaults on his critics were used as examples that he employs to repudiate those who are not in the supporters arena of Trump fans.  For the extreme narcissist, a fractured, damaged, or threat to view of self can and often does elicit a vengeful response to the criticism in an attempt to reestablish a “winner” profile.

In explaining Trump’s popularity, Burgo pointed to the economic state of the nation as an indicator of the popularity of other narcissist-leaning personalities such as Benito Mussolini and Adolf Hitler who took power during economic uncertainty in their countries.  The geographical movement of the population, and subsequent economic challenges provided a convenient scene to create a platform for scapegoating and blaming.  So for someone whose personal economic challenges can be blamed on another demographic, it becomes an easy tool for convincing this segment of the electorate that the “other” is to blame.  Trump’s speeches often involve one-word answers to complicated social, political and economic issues facing the country which Burgo said is appealing to the portion of the population that is seeking an authoritarian figure.  In fact, authoritarianism appears as the deciding factor in a voter’s choice of candidates in this group. 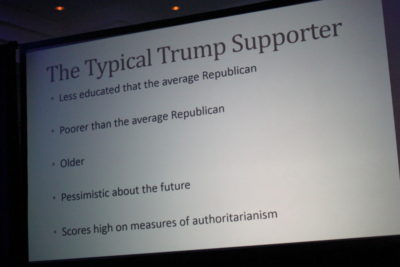 Although the demographic of Trump supporters varies over time, his supporters are likely to be less educated than the average Republican voter and lack skills to flourish in an uncertain economy.  So promises of economic recovery thereby elevating an individual in this group to a higher level of one’s own “winner” status are appealing to this voter according to Burgo, “[Trump] continues to demonstrate the populist appeal of extreme narcissism as a method of coping with doubts about one’s personal value and social status and warding off dread and insecurity in such troubled times.”

In predicting the last stretch though, Burgo finishes, “There are a lot of people out there who are scared and however they feel about Hillary Clinton, they’re going to come out and vote for her because they don’t want him in the office.”