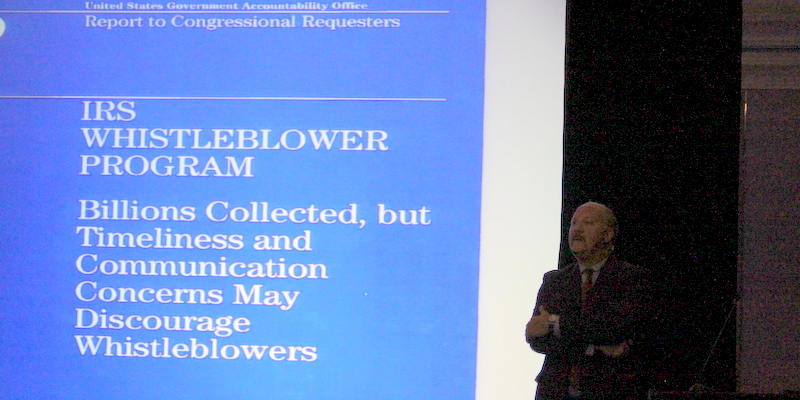 MIAMI-“In the entire financial crisis-the worst financial crisis in our generation-there was only one person who went to jail, which was myself, the whistleblower who exposed the largest and longest-running tax fraud in US history.”

In 2005 Brad Birkenfeld began the long process of exposing infractions, misdeeds, and crimes of UBS, a Swiss bank where Birkenfeld was then employed.  It was a single 3-page document of thousands of documents of internal communications that caught his eye.  He exposed how he and the bank were helping tens of thousands of wealthy US citizens evade US taxes by transferring their money to UBS, becoming the quintessential Swiss bank scheme.  It would be three months later that he realized the fraudulent practices would avert exposure lest he come forward and only after other departments in UBS disregarded his emails raising the issue.  After multiple complaints internally to bank officials including the legal department, he resigned his position at the bank.  He said that the bank board of directors buried an investigation into his complaint of illegal activity brought by Birkenfeld himself.

After a year of attempting to persuade his own banking institution to further investigate the massive fraud he went to the US Department of Justice which he said was his mistake, “What I realized was the Department of Justice, they’re in search of their own careers, taking credit for something, and covering up for their friends in high places.”

But attempts at exposing tax cheats didn’t stop there.  He said he took his claims to the Internal Revenue Service, The Securities and Exchange Commission and to the Senate Investigations Committee.  He cooperated in investigations to the extent of wearing a wire to track the travel plans and activities of the culprits.

Instead of protecting their source, in a surprising blow to Birkenfeld’s supporters, he was jailed and sentenced in 2008 and began a 40-month jail term on January 8, 2010 for conspiracy for his earlier actions in the tax scheme despite coming forward voluntarily.  The sentence was actually longer than what the prosecution proposed.

A subsequent Senate investigation of illegal offshore accounts figured the total US assets in the trillions, cheating US resident taxpayers of about $100 billion per year.  UBS responsibility was about $20 billion from the 19,000 alleged felons that he reported.  Although the US government put the number of US tax evaders at over 50,000 the Obama administration only made public about 4,000 identities.

The perpetrators holding these accounts numbered in the tens of thousands but none received jail sentences of any significance.  In fact, the US offered the tax cheaters amnesty, thereby allowing exemption from prosecution and in addition prevented the public from knowing the identities of those with the accounts.  The implications of knowing identities may be key to bringing down governments.  , According to his attorney Stephen Kohn, corrupt politicians have been accused of using the accounts to hide their bribes but worse to store development funds from developed countries that were intended for humanitarian aid, education, and possibly even military aid.

Illegal account holders were flocking to the IRS by the tens of thousands through the voluntary “outing yourself” program thought to be the result of what the clients thought Birkenfeld might have further revealed about their finances.  The IRS turned to other banks to investigate similar wrongdoing.

Birkenfeld was released from prison in August of 2012 and in September 11, 2012 received a $104 million award from the IRS whistleblower program for his heroism.

UBS settled with the US for $780 million in admission of criminal acts.  Those acts involved the work of its US division, UBS America for its role in money transfers from the US to Switzerland into secret accounts that would hide the money from the IRS through illegal stock trades and the setting up of trusts and trustees to handle the illegal transactions.

At the 2016 Offshore Alert conference in Miami on Tuesday, Birkenfeld told KGNU that he doesn’t regret his whistleblowing actions and gave advice to others who may find themselves in similar circumstances as he once was,

“Try to talk to a whistleblower who’s gone through it, and I’m happy to talk to people around the world in this matter because it’s important to educate them and give them some insight about what I went through and hopefully they won’t go through the same.”

Birkenfeld has authored a book that will be released in September.