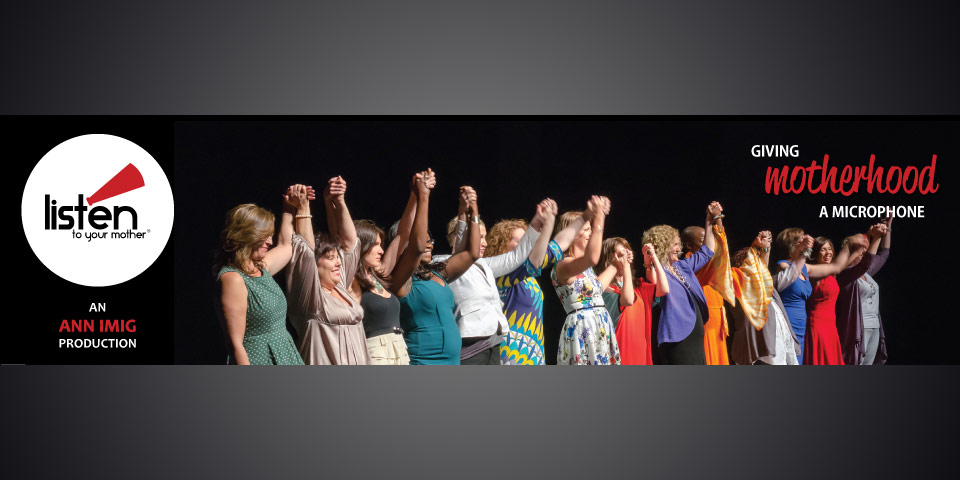 “This year’s show weaves together a lot of different themes into a really fantastic quilt.”

Last year Stephanie read a piece called Babies put the Fun in Funeral “that was about taking my breast fed 3 month old baby on plane ride so I could sing at the funeral of my 95 year old great uncle and what could possibly go wrong in that scenario?”

Katie Wise’s essay called “All you need is lovey”, a story about her son’s lovey, ended up in the Listen to Your Mother book. “It was a maternity tank top that says ‘Expecting Baby’ on it and it was his lovey and he was and is still obsessed with it and needs it to sleep – he’s 7 years old now – and it’s the story of one fateful day when both of his – we’d cut it in two so it could be in two places at once – and both pieces of orange shirt went missing on the same day. I was 8 months pregnant and racing around town like a lunatic and stalking homeless people and trying to return my son’s lovey.”

Stephanie and Katie say there is a lot of diversity in this years stories. “they span everything from pregnancy to postpartum anxiety, special needs parenting, empty nest parents who have that full perspective and also a few readers are talking about their relationships with their own mothers which can be quite complex as we all know.  So we really feel that this year’s show weaves together a lot of different themes into a really fantastic quilt.”
audio:

Listen to Your Mother Boulder is happening Saturday April 30th at the Unity Church in Boulder.  Doors open at 6.30pm, performance at 7pm.  A portion of the proceeds go to benefit EFAA, Emergency Family Assistance Association.