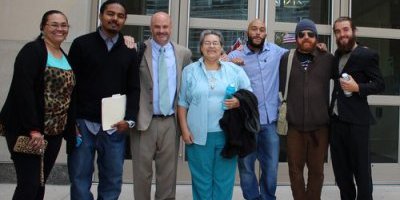 Sharod Kindell was shot four times after a traffic stop by Denver Police on January 9, 2015.  One of the bullets remained in his leg until earlier this year.  His family  has said that he has been mistreated in jail and that he has been a target because of his speaking out.  The following is an opinion piece submitted by Reverend Dawn Duval about the case:

How long should a chunk of bullet fester in a leg?

For Sharod Kindell, 370 days added up while he was jailed in the Van Cise-Simonet Downtown Detention Center after Denver Police officer Jeffrey DiManna shot Sharod when taking him into custody on January 9, 2015.

For more than a year Sharod dragged himself through the Downtown Detention Center reporting he was in immense pain and to request – on camera – pain medication and examination of his leg, requests that were either denied or rarely yielded a tablet of ibuprofen.  Additionally Sharod filed over 30 complaints of mistreatment, however Sharod informed friends and family in December 2015 that Denver sheriff’s deputies raided his cell and shredded his records of complaint.

Even following Sharod’s surgery to remove the remainder of the bullet on January 14, 2016 the medical neglect continues.  Hours after his surgery, Denver jail officials returned Sharod to his cell rather than take him to the medical pod.  In his cell Sharod was given no pain medication and no antibiotics for the infection.  Adding further insult to injury, Sharod informed his loved ones that Denver jailers are taking items purchased at the commissary and his books are being taken from his cell.

Sharod is a Black man in the Downtown Detention Center, and Sharod and his loved ones fear for his life.

Such medical neglect and mistreatment by deputies is consistent with the culture of mistreatment in the Van Cise-Simonet Downtown Detention Center – where Marvin Booker and Michael Marshall were murdered by Denver sheriff’s deputies.  In early 2015 the city of Denver paid independent contractors, Hillard Heintze of Chicago and OIR Group from L.A., a combined cost of $295,000 to guide its reform of the Denver Sheriff’s Department (DSD).  The agencies produced an incredible 277 recommendations for reforming DSD.  How seriously and quickly is the city of Denver reforming DSD given Denver sheriff’s deputies’ murder of Michael Marshall in November 2015 and Sharod reporting that Denver jail officials have withheld medical treatment and been mistreating him?

A few hours after his post-surgery mistreatment, a pastor of a local church visited Sharod and was told by Denver jail officials that they had given Sharod medicine following the surgery.  The pastor did not see any evidence of this and declared to Sharod’s friends and family: “Something is very, very wrong here.”

The Supreme Court case Estelle v. Gamble established that the deliberate failure of prison authorities to address the medical needs of an inmate constitutes “cruel and unusual punishment.”  Withholding humane care from Sharod for over a year meets this criterion, and shredding his written complaints rather than addressing them surely further incriminates DSD personnel.  Despite the City’s massive expenditure for guidance on reform, and despite hiring a new sheriff, Patrick Firman, as the costly guidance recommended, DSD behavior in Sharod’s case has not met Sheriff Firman’s call for “Making Denver Sheriff Department something we can all be proud of.”

It is unacceptable for another Black family in Denver to be informed their loved one died unnecessarily in custody at the hands of Denver law enforcement.  We, Sharod’s family and community, call for immediate, humane, and complete medical care for Sharod Kindell and all ailing people who are being warehoused in Denver law enforcement agencies.  We call for an investigation into Sharod’s complaints of being denied medical care.  And we call for the City of Denver to give Denver residents dates for when each of the 277 recommendations will be operationalized.  Whether free or jailed, all residents of Denver must be treated with human decency and respect.

There will be two hearings  regarding Sharod Kindell on Thursday, April 28th  at Lindsey-Flanigan Courthouse, 520 West Colfax, Denver, Courtroom 5C.

A native of Denver, Colorado – Rev. Dawn Riley Duval is a graduate of Denver East High School, University of Colorado – Boulder, she has a Master of Divinity from Vanderbilt Divinity School in Nashville, Tennessee, and she is currently completing doctoral work at Chicago Theological Seminary.  Rev. Dawn is an itinerant elder in the African Methodist Episcopal Church, a revolutionary in the Black Lives Matter movement, and the proud mother of two children.