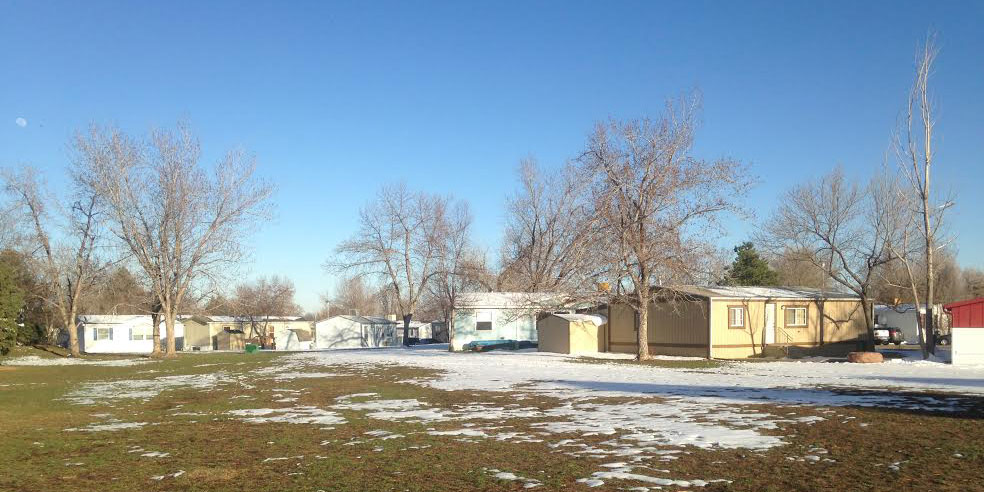 Residents of mobile homes in Colorado are finding that they’re more vulnerable than other homeowners. That’s concerning because mobile home living is still the only option for many people seeking affordable housing.

Jamie Shuey is one of them. She lives in Boulder Meadows, one of the eight mobile home parks in the city and she has prime real estate: she has a great view of the mountains, room for road, room for bikers and a community she seeks. She also has a garden.

She’s lived here for over 35 years. Her home is relatively new but still dates back to the ’80s. She says she takes good care of it. She’s been retired for 6 years. And for every year she’s on fixed income, her rent goes up.

“Once my rent is more than my social security I’m going to be in trouble,” said Shuey.

That’s how many mobile home owners in Boulder are feeling right now. What has often been seen as an affordable option for home ownership is more of a struggle than ever before.

“Across the country, there are about 2.9 million households living in 50,000 manufactured housing communities. For everyone, security of tenure is the main issue along with ever increasing rents and economic eviction,” said Ishbel Dickens. She’s the Executive Director of the National Manufactured Home Owners Association, or NMHOA for short. She claims mobile home owners are some of the most vulnerable communities.

Dickens was in town for a Know Your Rights meeting at the Boulder Public Library. The meeting was to inform mobile homeowners of rules and regulations in accordance with the Colorado housing statute and the city’s ordinance. She says in areas like this, mobile homes are one of the most affordable housing options for seniors and new families.

“And yet as an asset it depreciates over time,” Dickens asserts.

A big concern at the meeting was the failed legislation that would have offered more protections for mobile homeowners. State Sen. John Kefalas, a Democrat from Fort Collins spearheaded the bill that would have set up demographic info on mobile home parks and created a dispute resolution process between land and homeowners.

Boulder Meadows is one of the eight mobile home parks in the city. All images: Claire Woodcock

“I don’t know how after hearing the really compelling heartfelt stories that homeowners told in this hearing, anyone could vote against them, but they did,” said Colorado housing attorney Ann Norton. She said the bill failed along party lines because members of the committee did not support increased protections for homeowners.

Dickens wants legislators to know in the future that for every one homeowner present, a hundred residents are too afraid to be there. Let alone, speak.

“I think we have to recognize that any homeowner coming to testify is an incredibly brave individual. They are putting a lot on the line including fear of eviction to even show up and speak. The hearing room would be packed if people were not so intimidated,” said Dickens.

Norton offers a remedy: In order to help homeowners assert their rights, lawmakers need to continue educating residents and landowners about what each party’s respective rights and obligations are. She also asserts that helping residents organize and come together will help promote their mutual interests.

“Our real goal is to do what it takes to equalize the unequal relationship that homeowners and landowners have now across the country but particularly here in Boulder,” said Norton.

Back in her garden at the Boulder Meadows mobile home park, Jamie Shuey acknowledges her situation.

“The service goes down, the rent goes up, and it’s becoming less and less affordable,” said Shuey.