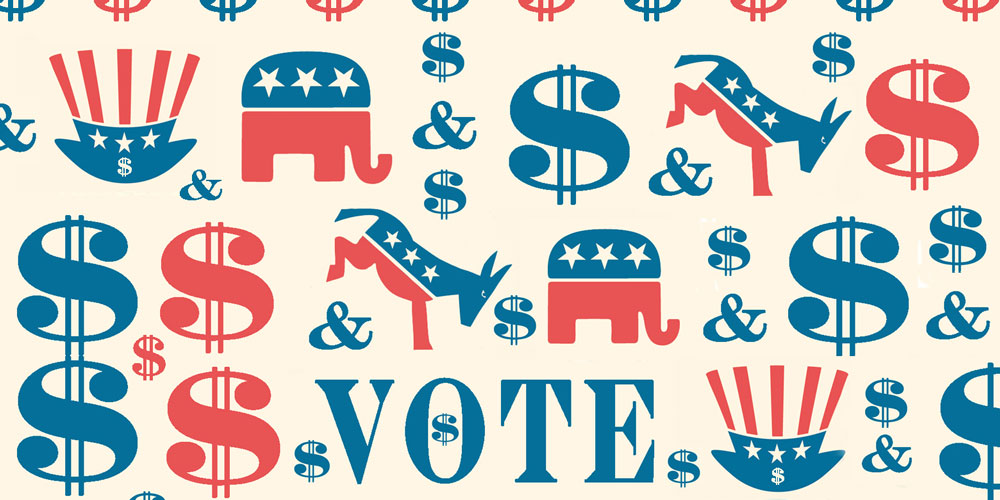 By Julia B. Chan, Reveal

Money in U.S. politics was once a straightforward thing, but we’re now in the era of dark money. We look at who’s spending, how much, where the money’s flowing and what it’s paying for. Image: Michael I Schiller/Reveal.

In 19th-century America, a politician running for office would pay to print ballots with his name on them and pay voters to cast them. The cost was about $2.50 per vote.

But the sheer amount of money involved now dwarfs every previous period of Wild West American politics – spending will top $5 billion by the end of the race to the White House by some estimates.

Enter Mad Men: This heap of money is fueling a barrage of political ads. Messages, which have cost more than $300 million so far, are being designed specifically for you – popping up in your Facebook feed or streaming into your living room during commercial breaks.

In this Reveal hour, a collaboration between The Center for Public Integrity’s campaign finance reporting team and WAMU in Washington, we look at who’s spending, how much, where the money’s flowing and what it’s paying for.

Producer and reporter Laura Starecheski takes us behind the scenes with John Dunbar and his team at CPI as they track the millions behind political ads. This ongoing CPI analysis of data from ad monitoring service Kantar Media/CMAG provides a picture of who is on the air and where. (Scroll down to see the interactive graphic)

In the second half of the show, Reveal takes a look at how kings are made with two political donor powerhouses: first, the new-money Texas fracking billionaires you’ve never heard of, who are backing Ted Cruz; then Wilson Sayre of WLRN in Miami takes us through the intricate dance of cash, candidates and environmentalists unfolding in Florida’s Democratic race.

Finally, we head to local city races, where WAMU’s Patrick Madden takes a look at what happens when super PACs hit close to home.

Where spots are aired: