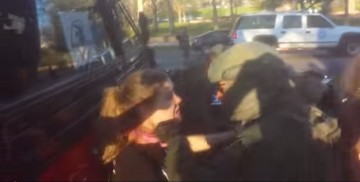 An April 29, 2015 rally in Denver against police brutality resulted in several arrests.  Most of those cases were dismissed but it has been the Denver Police Department that has been forced to answer to several complaints and now a federal lawsuit for their actions that day.

Jessica Benn of Fort Collins is one demonstrator who denounced the excessive force used against the demonstrators by police as she documented the arrest and alleged assault of her own husband by Denver Police.  After the demonstration, police also were reported to the Office of the Independent Monitor and the Internal Affairs Bureau for indiscriminately pepper spraying into a crowd including children.  Several children were injured and taken to area medical facilities after the incident.

The lawsuit alleges that Denver Police District Commander Tony Lopez violated the First Amendment rights of Benn when her cell phone was confiscated when police noticed she was recording them using excessive force to make arrests.  The lawsuit describes the demonstration as peaceful and reports from other demonstrators who also participated allege that police approached the demonstration using violence including assaults, vehicular assaults, and illegal arrests.  Benn alleges that police smashed her husband’s face into the ground during what other demonstrators have called an attack on a peaceful assembly.  Many injured said they were walking on a public sidewalk when police assaulted them, including the children.

Commander Lopez is accused of unlawfully taking Benn’s cell phone and the accompanying officer is accused of assaulting her with a baton which led her to inform the officer of her pregnancy.  After being pinned next to the side of a bus, the officer then released her from the hold.

The lawsuit points to several inadequacies in police department policy including training and supervision, a common complaint among those who have had to defend themselves in court proceedings eventually to have their cases dismissed.  Specific to the lack of training are reports by members of the public who testify at quarterly forums of the Independent Monitor and the Citizen’s Oversight Board that they too have experienced excessive force and yet others who testify that they also have had their recording equipment taken by Denver police, never to be returned to them.  Benn reports that her cell phone also was never returned.

Benn’s lawsuit further alleges that “Denver and Commander Lopez violated Ms. Benn’s First Amendment right to gather, receive, record, and disseminate information and news on matters of public importance relating to civil liberties and civil rights, including the official actions of police officers in public.”  It also alleges violations of Benn’s Fourth Amendment right against unlawful seizure of property and the Fourteenth Amendment right against deprivation of her property without due process.

In the lawsuit, Benn describes the incident and her determination for informing the public of police behavior at the scene.

Benn is represented by attorney Elizabeth Wang of Loevy & Loevy, one of the largest civil rights law firms in the country with offices in Chicago and Boulder.