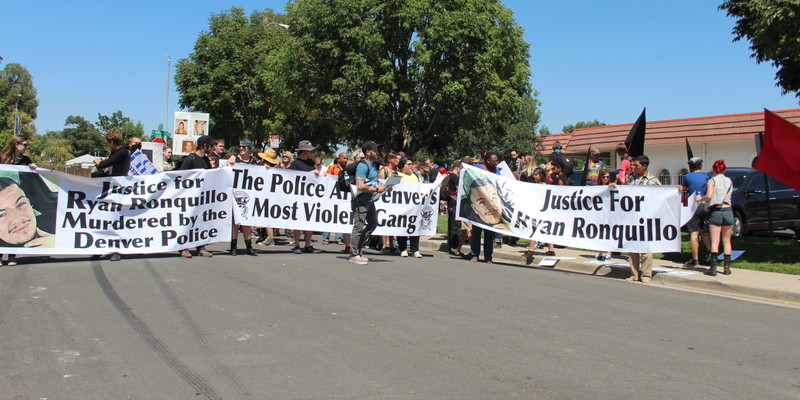 She woke up on the floor today with several police officers standing over her prodding her to wake up.  Instead of an ambulance which had been requested, Sheridan Police sent officers in response to a call about a woman who had collapsed at work.  An ambulance never came.

On July 2nd of 2014 witnesses told April Sanchez that police also neglected to call an ambulance for her son as he sat choking on his own blood.  Instead, witnesses told the mother that when they tried to help her son, police held their guns out, pointed to the crowd-including children-and yelled to stay away.  Those who were in the funeral home parking lot where Ryan Ronquillo was fatally shot by Denver Police said he was still alive after he had been shot.  She was told by witnesses that an ambulance never came for him, but that one was called to transport a police officer whose leg was injured in the incident.

Ronquillo had been approached by police vehicles on that summer day accused of operating a stolen vehicle and domestic violence according to a press release from the Denver Police Department.  He had been followed earlier that day by DPD to the Romero Funeral Home in west Denver where his family said he was attending the funeral vigil for his best friend.

Today Denver Police Chief Robert White emailed a later-retracted press release to Denver community members who criticized him for contacting media before contacting the family.    The Denver Post and KGNU received a copy of the press release from different sources.  In the release White said that the Denver Police will not discipline the officers in the July 2, 2014 fatal shooting of 20-year old Ryan Ronquillo.

White rescinded the press release but not before it was circulated to other members of the community.  The release claimed that multiple agencies participated in a “thorough and impartial review process of the shooting.”  Those agencies included the District Attorney’s Office that has received ongoing criticism for its handling of police shootings involving DPD policy but also about transparency.  Those currently running to replace the current District Attorney have all said that they would change current procedures were they to be elected to the position in November’s election, especially regarding communication with affected families.  Another, the Office of the Independent Monitor under Nick Mitchell reportedly did not authorize the use of the agency’s name, nor did it approve all findings of other agencies before DPD’s release of the statement, ” In this case, I agreed that the shooting was consistent with the old DPD policy on shooting into moving vehicles, and that the officers who fired their weapons should be exonerated.  Yet, I had—and expressed—significant concerns about  one supervisor’s decision to order the arrest of Mr. Ronquillo in a parking lot that was crowded with standing community members while Mr. Ronquillo was behind the wheel of a running vehicle.   I believed that this was not consistent with DPD policy, which prioritizes the safety of officers and the general public.  The DPD and Department of Safety disagreed.”  And yet another, the Department of Justice (DOJ) has in the past contacted the subjects or families whose cases are under review yet April Sanchez confirmed to KGNU today that not only was she not contacted by the DOJ, but that she was not even aware that the Department had been contacted by the Denver Police.

Also troubling to supporters was the presence of Officer Jeffrey DiManna at the Ronquillo shooting and  who was also on the scene in three separate officer-involved shootings during a 6-month period where the suspect was either critically injured or killed.  At least two of those cases are in the early stages of litigation.

Denouncing the failure to communicate with the parents of those killed by the Denver Police Department, The Colorado Latino Forum found itself informing the family of Ryan Ronquillo that the officers had been cleared.  Lisa Calderon, Co-chair of the Colorado Latino Forum said in a statement, “The lack of compassion and courtesy by DPD toward April Sanchez is also a signal of disrespect toward the Latino community.  It’s bad enough that the killing of Ryan happened in what should have been a sacred space-people gathering for prayer-and then to add to the community’s trauma is a mistreatment of a mother still in mourning.”

Families of the last four fatal police shootings have all criticized Mayor Michael Hancock, Manager of Safety Stephanie O’Malley, and Police Chief White for failing to communicate with them either proactively or by returning calls.  In frustration the mothers of those killed by police interrupted a September 19, 2015 Mayor’s Cabinet in the Community meeting with a healing ceremony to call attention to this lack of communication.  A meeting between the mothers and Hancock has since been scheduled for next month.

While recovering from the DPD announcement at the office of a local human and civil rights organization April Sanchez told KGNU that police regularly park outside of the family house, take pictures of a memorial banner displayed there, and laugh at her.

She responded to yesterday’s announcement while pointing out several inaccuracies in the statement released by police. Troubling to her was the failure of DPD to release the entire video clip in the funeral home parking lot especially that which showed police drawing guns on an unarmed crowd of witnesses who were also attending the funeral vigil.  Another is DPD claim that its District 1 officers didn’t realize the parking lot was that of a funeral home despite District 1’s precinct location just a few blocks away, but also despite a visible business sign and the presence of a hearse.  Sanchez expressed concern about the shooting of her son in the presence of children, also a concern of witnesses in the July 12, 2015 police fatal shooting of Paul Castaway who was also shot in nearby proximity of small children who have yet to receive trauma recovery mental health services for their experience.

During this interview, the mother of Jessica Hernandez who was also fatally shot by Denver Police but in January of 2015 arrived to offer her condolences to the grieving Sanchez.  Both mothers confirmed to each other continual police harassment and intimidation when police regularly park outside of the family homes, take pictures and follow them both in marked and unmarked cars.   Paul Castaway’s mother Lynn Eagle Feather in a previous interview with KGNU also reported police harassment and intimidation at her home only to hear police officers respond to her that they are only performing regular patrol.

All mothers also criticized media reports that vilified their children even before speaking to the families, but also for reporting only police version of events.  Both mothers expressed outrage that events leading up to their children’s deaths have been reported as facts despite the lack of a trial not available to their children since they are no longer alive to defend their accusations in a court of law.  But above all both wondered how the penalty for police reported accusations could result in extrajudicial execution not subject to others who were suspected of more serious acts such as the Aurora theater shooting where the then suspect James Holmes was taken alive.

Since the shootings, the mothers say they have been catapulted into activism.   The three mothers who live in Denver regularly attend and speak at community meetings about their cases and the treatment they have received.  The families have all participated in rallies and marches in support of their children.  Both Sanchez and Eagle Feather have documented injuries they have received and report police physical assaults on them during two of these marches.  Sanchez’ arm was injured in one and Eagle Feather used crutches for weeks after injuries to her ankle.  Both mothers say police pushed them to the ground at these events that often draw a large number of heavily armed police carrying military grade weapons.

Both families have secured legal representation to pursue their cases and if successful in civil suits, any financial compensation would be the responsibility of Denver taxpayers as it was in 2015 when taxpayers paid out a record $10 million dollars for law enforcement excessive force cases.

Meanwhile, Sanchez who visits her son’s grave everyday said, “This is torture.”