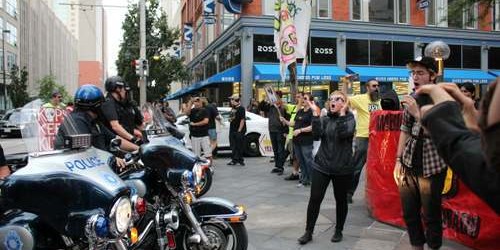 “I would say absolutely there is political profiling happening by the police in Denver.”

A recently leaked Denver Police Department Crowd Management Manual dating back to 2008 shines a light on police treatment of protests in the city.

Unicorn Riot is a non profit, all-volunteer media organization that started about a year ago.  They have a presence in  multiple US cities including, Denver.  They recently published a heavily redacted version of the 2011 edition of the “Denver Police Department Crowd Management Manual” obtained through a Colorado Open Records Act request.

Days later, an anonymous source sent them an unredacted copy of the 2008 edition of the manual. The two editions appear to have few differences and the policies described in both versions match the behavior of police toward protests.

Unicorn Riot says the manual reveals police tactics when it comes to protest events in Denver and shows how the DPD approach who to arrest and what to charge them with. “The most common charge is obstructing a street or passage, which is a minor moving violation…yet that is the main crime that these police forces are deployed against.”

Unicorn Riot says that they’ve seen a pattern in the last 2 or 3 years during street protests in Denver that shows police cherry picking people to arrest. “More so than arresting people by picking them out of the crowd, they’ll wait until people leave the march and then militarized swat team officers will go arrest someone as they’re leaving for their car or as they break off from the main group.”

Chris, a volunteer journalist with Unicorn Riot based in Denver says the DPD are also using social media to monitor political activities and protests. “Any time a Facebook event is created for a protest, the Denver Police Intelligence Unit notes that right away, creates a report, forwards it to their command staff and is updating the city, the mayors office, other agencies.”

“They definitely still seem very concerned with collecting information about political events, and identifying the organizers and making decisions on when to use force or when to make arrests, based on their determination on who is behind the event. I would say absolutely there is political profiling happening by the police in Denver.”