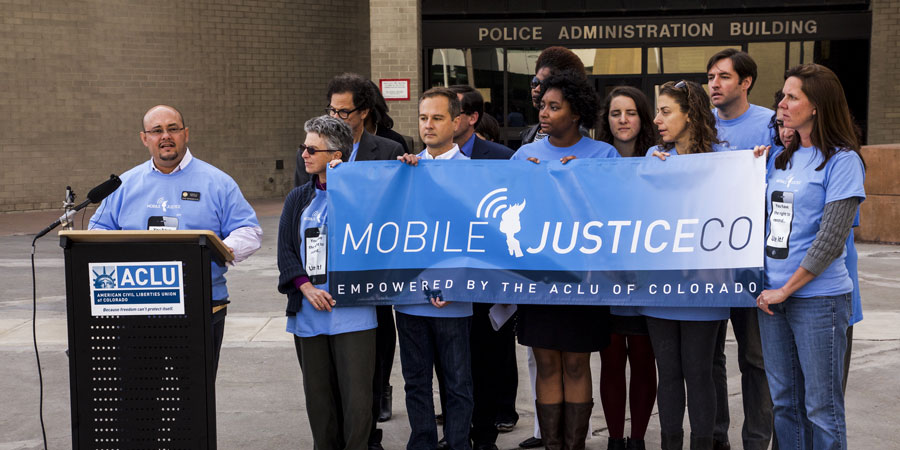 “It is about accountability. It is about transparency. But, I don’t consider it to be anti-police.”

At a press conference held just outside the Denver Police Headquarters on Thursday, October 29th, the American Civil Liberties Union of Colorado became the most recent state to launch its own mobile justice app, allowing users to securely record police activity, which uploads directly to the ACLU in real time. Nathan Woodliff-Stanley, Executive Director of the ACLU Colorado, told KGNU’s Tony White that there are several cases of officers attempting to delete incriminating material from mobile devices and this app will prevent that from happening. “It is about accountability. It is about transparency. But, I don’t consider it to be anti-police,” Woodliff-Stanley said.

Colorado is the eighth state to implement its own mobile justice app, which includes a “Witness” function that sends notifications of other active apps in the area, such as during a protest or indicating a recording is taking place. There is also a “Report” feature that lets the user attach a detailed account to the video after the incident.

Woodliff-Stanley says that this is a very important part of the process.”We’ll pay a lot more attention to the videos that are accompanied by a report, than the ones that are not, and it also gives us greater context of what is going on there.”Woodliff-Stanley said the hope for this app is to reduce violence in police encounters, for all parties involved, and to offer a platform to follow up on concerns of police brutality or racial profiling. He said that this app will keep the video in the private hands of the citizens so the police can not limit or destroy the material to their advantage.”There have been cases where police have actually confiscated phones or tablets and tried to erase what was on them. This app will prevent that from happening.”