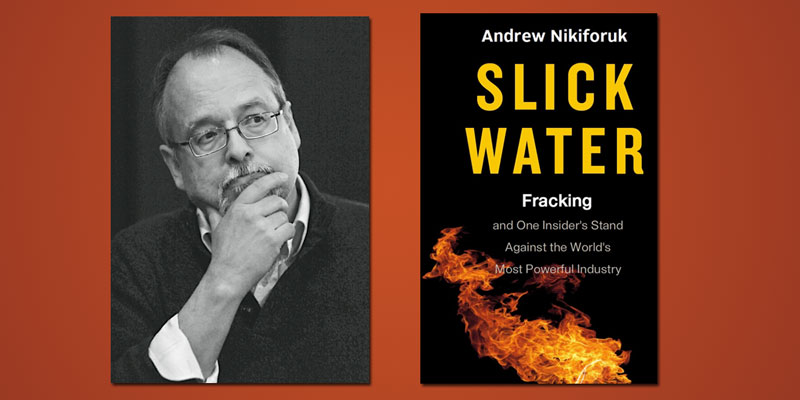 “Local government, local legislators are not listening to local people and are in a very draconian and authoritarian way, imposing a technology with all kinds of liabilities upon their communities – that’s not what democracy is about.”

Andrew Nikiforuk‘s latest book Slick Water tells the story of Jessica Ernst, a form oil and gas industry consultant who turned whistleblower on her employer after she discovered that energy giant Encana had secretly fracked hundreds of gas wells around her home, piercing her community’s drinking water aquifer.

Since then, her ongoing lawsuit against Encana, Alberta Environment, and the Energy Resources Conservation Board has made her a folk hero in many places worldwide where fracking is underway or is being contemplated.

Andrew Nikiforuk interweaves Ernst’s story with the science of fracking and stories of human and environmental repercussions left in its wake.

Nikiforuk says the fracking situation in Canada is similar to what is happening Colorado – with one exception “that is that Albertans haven’t reached the same political conclusions that Coloradans have in terms of fighting the spread of this very disruptive technology.”

Nikiforuk says the Jessica Ernst’s legal fight could inform Coloradans fighting fracking and government’s lack of regulation “the demonstrates the importance of gathering all of the scientific data that you can, the case demonstrates the importance of holding government accountable to the people.” Nikiforuk says the most troublesome thing for him in the story is how elected officials are failing their constituents when it comes to oil and gas exploration “local government, local legislators are not listening to local people and are in a very draconian and authoritarian way, imposing a technology with all kinds of liabilities upon their communities – that’s not what democracy is about.”

Andrew Nikiforuk will speak about Slick Water on: