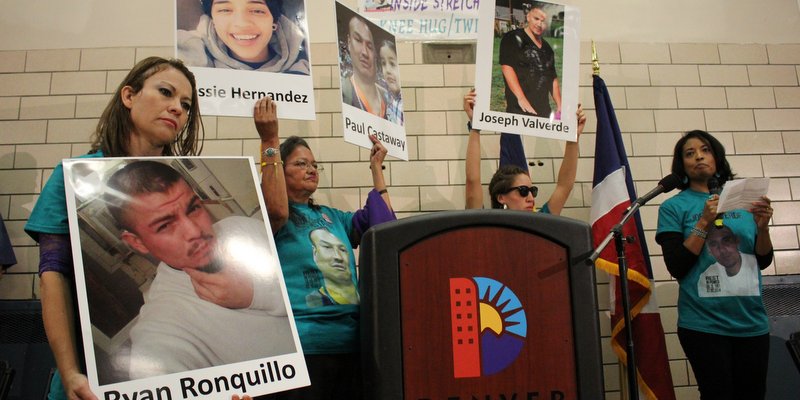 In a public healing ceremony at the mayor’s Cabinet in the Community meeting on Saturday September 19, 2015,  the mothers of those affected by police violence and their supporters unexpectedly entered the meeting and took over the microphone.

Four Denver residents were fatally shot by Denver police in a 12 month period from July 2014 to July 2015.  Four Denver mothers of those killed have joined together to help each other heal and with their supporters, be heard by the community.  Lynn Eagle Feather, mother of Paul Castaway, Luara Hernandez, mother of Jessica Hernandez, April Sanchez, mother of Ryan Ronquillo, and Isabel Padilla, mother of Joe Valverde said that many media sources have “demonized” their children and that it was important to them for the community to know their children.

Mayor Michael Hancock held his quarterly Cabinet in the Community meeting on Saturday.  When the mothers filed into the meeting wearing shirts bearing their children’s photos and carrying posters of their children, Mayor Michael Hancock ordered the city TV cameras to be turned off.  KGNU’s recording equipment continued to record.  Confronting the mothers, their representatives, and their supporters, Hancock assumed a stern voice,“This is a peaceful meeting!”

The organizers responded to the mayor’s confrontation when Lisa Calderon, Co-chair of the Colorado Latino Forum spoke first, “We are peaceful, Mayor!”

Ryan Ronquillo and Joseph Valverde were fatally shot by Denver police on July 2, 2014 in separate incidents.  Circumstances involved in both shootings have angered the nearby community, some of whom showed up to stand behind Ronquillo’s and Valverde’s mothers.  The mother’s of both have said that there are circumstances that they have learned that have not been made public.

All officers involved in the shootings were cleared of wrongdoing. In police reports, all officers said they feared for their lives during the encounters.  Before changes in Denver Police Department policy last June, officers were allowed to shoot into moving vehicles, the common circumstance in the shooting of both Hernandez and Ronquillo.  Following public outcry after the Jessica Hernandez killing and after public pressure, the police department changed its moving vehicle policy in June of 2015:

“Firearms shall not be discharged at a moving or fleeing vehicle unless deadly force is being used against the police officer or another person present by means other than a moving vehicle.”

The families of Jessica Hernandez and of Ryan Ronquillo have said that the policy arrived too late to save their children.  Roshan Bliss who works on police brutality issues said that the policy change was not enough, “There needs to be an objective standard for determining if an officer really feels in danger because so often that’s the excuse they use to shoot people of color.  We hear that an armed officer says he felt threatened when confronting an unarmed community member.  Despite being surrounded with additional armed officers and despite having access to additional armed backup with additional weapons, how can an officer say that he felt threatened?”

Responding to what they say is the negative press regarding their children and the lack of response from the mayor’s office, the mothers of those killed have been holding weekly meetings together along with supporters.  All say that their calls to the police department and the mayor’s office have not been returned.  Together they decided to approach Mayor Michael Hancock and Denver Police Chief Robert White themselves.  When Mayor Hancock responded to the mothers’ request to make a statement with “This is not the forum for this to happen,” the room began ringing with the chant, “We will speak.  We will speak.”  When Hancock said he would allow two minutes, the mothers and their representatives took ten minutes to each talk for one minute about their children and then to lay out their demands (below).

After the construction of the healing altar and prayer, the ceremony ended with the act of the community healer passing out flowers to the mayor’s panel including to the mayor and the police chief. 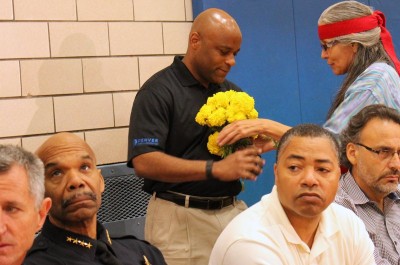 Exiting the room on their terms, the mothers filed out of the room along with supporters leaving behind an almost empty room when those who had come to the meeting bearing signs raising other district issues such as housing and a recreation center, joined the procession out of the room and then outside to continue participating in the healing ceremony.  Most of those remaining were those whom the mayor had earlier introduced as city employees however even city employees followed the mothers outside to participate in the ceremonial circle. 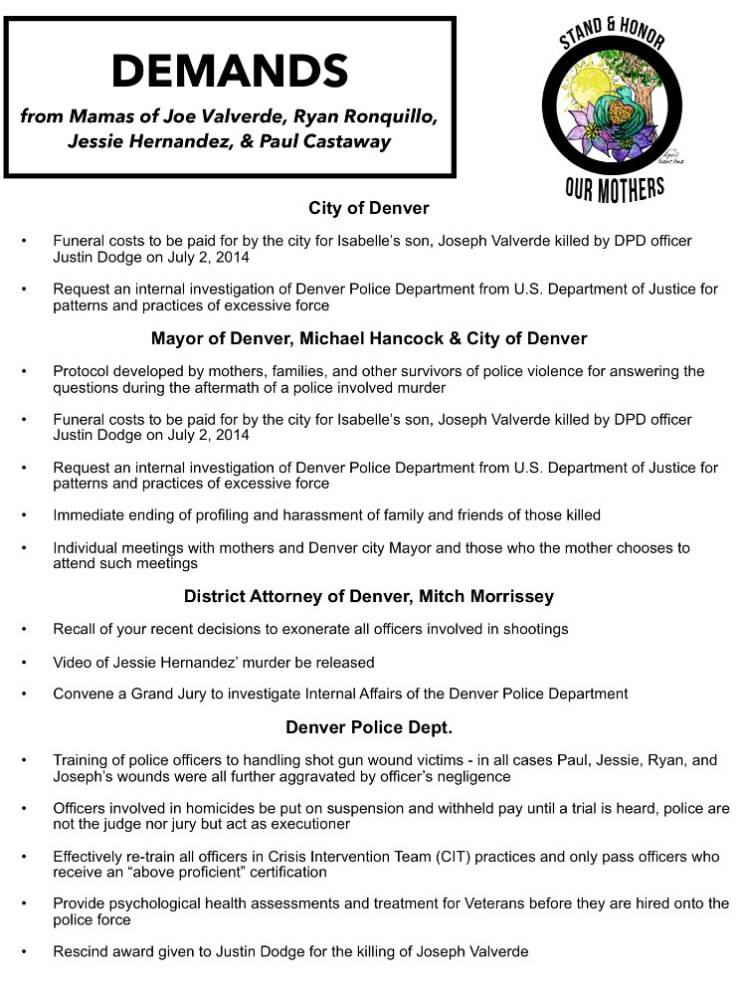