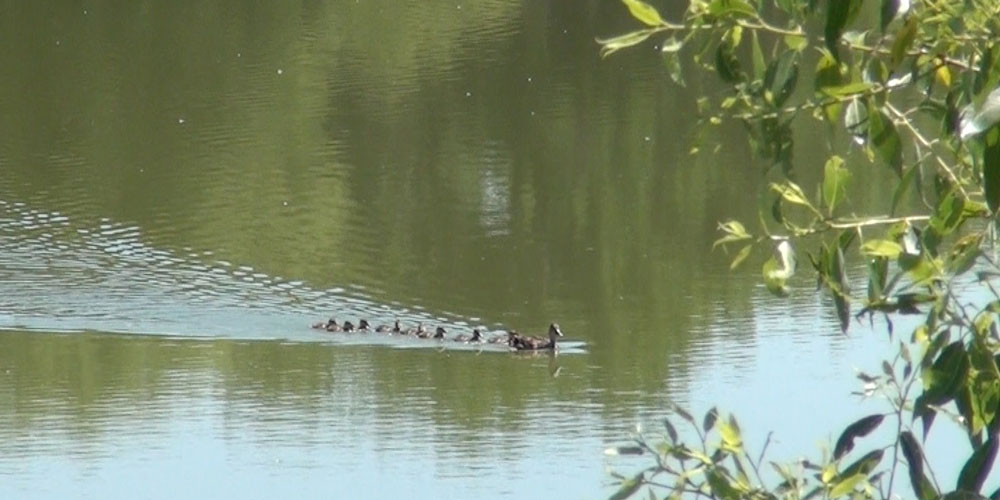 Colorado’s South Platte River basin is a powerhouse for crops and cattle.  Massive reservoirs quench the region’s thirst, with farm fields generally first in line.  Wildlife? It’s often last. But a small win-win is giving waterfowl a little more room at the watering hole. It’s a program that creates warm winter ponds for migrating ducks — then gives the water back, in time for summer crops. For Connecting the Drops, Shelley Schlender reports.

Motorboats tow water-skiers across the North Sterling Reservoir located about a two-hour drive northeast of Denver. Waves lap the shore, and boys play cards with their grandfather after a day of fishing.

While the reservoir is a popular state park, its bigger purpose is for agriculture.

In the spring, the reservoir stores snowmelt from the South Platte River. In the summer, it supplies water for over 40,000 acres of farmland.

Here in summer, seagulls and sandpipers flock to the reservoir. Most ducks are in Canada. In the colder months when ducks are migrating, thousands fly through,, but they typically don’t settle on this massive lake.

“Our reservoir, North Sterling Reservoir, will freeze over in wintertime,” says Yahn, “so the ducks don’t really have a good place to go.  And, you know, our reservoir is 65 feet deep.”

Dabbling ducks need shallow water.  To show just how shallow,  Yahn drives to a hayfield that includes some  mud flats, each about the size of a city dweller’s yard and only two feet deep.  Yahn calls them “recharge” ponds, but they could also be described mud holes, or maybe soggy hollows.

“Recharge pond,” though, is actually their official name, and they don’t just happen; they’re intentionally made from natural depressions that previously did not hold much water.

To transform them into recharge ponds, first farmers must first earn a water right through Colorado water court.  Then, documenting every drop, farmers pump water into their recharge ponds starting around November, when groundwater is plentiful.  They keep refilling them until March, as water constantly seeps out of them.  The water then percolates through the soil, slowly heading back to “recharge” the South Platte River.

“The goal,” says Yahn, “is to have it during those critical times – July, August, and September.  That’s really where there’s a demand for water above what the supply is.”

A farmer who legally captures winter water through a recharge pond has essentially retimed it, making it possible to add that same amount to summer crops.

As a side effect, during the winter, ducks benefit.

During winter on Colorado’s northeastern plains, ducks can bob up and down in the recharge ponds because the pumped up ground water is so warm that it doesn’t freeze.

“Most people … are very used to seeing that duck butt sticking straight up in the air with the bill kind of grazing off the bottom of the pond,” says Denver nature lover Kent Haybourne.  “So you really want this water to be at a depth where the duck can tip its head under water and eat.”

Heybourne, a doctor, is so impressed by recharge ponds, he’s contributed land and money for creating them.  He donates his water credits to nearby farmers, who use them for summer crops.  Assisting him financially and with legal and engineering expertise is Ducks Unlimited, one of the nation’s oldest and largest conservation groups.

“We did about 20 million dollars worth of those grants.  And there was probably about 26 different landowners and about 40,000 acres conserved,” says Greg Kernohan, who leads the Ducks Unlimited recharge pond efforts.  “It’s been a pretty incredible impact over a 10-year period.”

Kernohan teams up with hunting groups, farmers, and even businesses that provide matching grants, to help offset their corporate water use.  Companies helping range from carmakers and software giants, to brewers.

As for the ponds, Kent Heybourne says that visiting one during the winter is kind of a miracle.

“You go out there when it’s 10 or 15 degrees below zero  . . . and there’s this beautiful open water with steam rising off of it, and of course, you know, that’s fabulous habitat for the ducks.”

Nature lovers like Kernohan and Heyborne hope the success of recharge ponds will inspire more Coloradans to find win-win ways to share water with wildlife.

Connecting the Drops is a yearlong collaboration between Rocky Mountain Community Radio Stations and the Colorado Foundation for Water Education, with support from Aurora Water,  Find out more at YourWaterColorado.org.