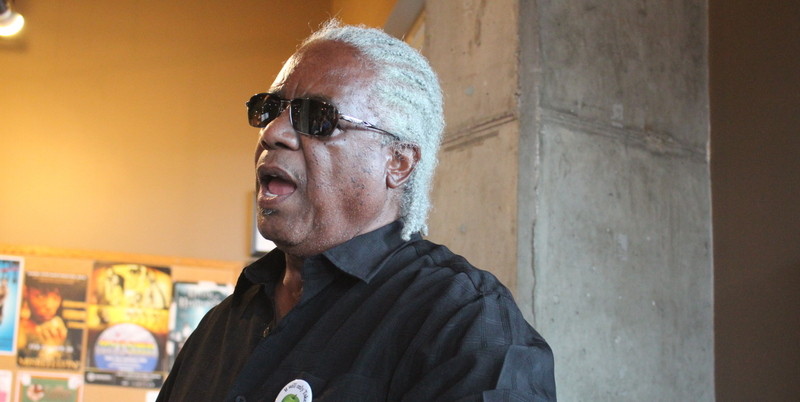 KGNU’s mission statement includes the goal of maintaining a space for underrepresented communities to air their voices and stories.  Because of the limited opportunity for victims of police misconduct to tell their stories, Badge of Courage is providing an opportunity for survivors of police violence to speak.  In today’s edition we hear from Virgil Robinson.

On Friday June 19, 2015, KGNU received a phone call to say that Denver resident Virgil Robinson was protesting on the north steps of the capitol and that police were “harassing him.”  I arrived to find a group of supporters surrounding Mr. Robinson who joined his rally while chanting “Justice in America.”

His action ended peacefully but his past experience with police hasn’t always ended so.  He described to the public in a March 17th community meeting where Denver police officers failed to appear to what was organized to be a public dialogue.

Robinson makes a sign in support of Pierce resident Kristie Allbrandt who was facing an eviction following a foreclosure.

Virgil Robinson (2nd from left) speaks to officer on June 19, 2015 after being approached several times. Supporters say that it was due to the presence of supporters that security later backed off from asking him to leave. He told officers, “I have a right to be here and am not leaving.”