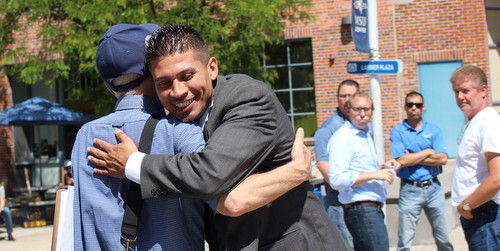 Denver activist Robert Lopez has reported over time of the multiple occasions he has been stopped by police for what he says was racial profiling.  Those stops were just some incidents that drew him into activism against police misconduct even before this latest national uprising.

Another was last year when he was accused of tampering with a witness who had been accused of among other charges, attempted murder.  Something didn’t sit right with Lopez about the case, and he decided to attend the trial.

Lopez, a board member for the Colorado Latino Forum, and volunteer for the Colorado Progressive Coalition was arrested at that trial and incarcerated in maximum security in Jefferson County jail for six months accused of tampering with the witness.   Through those six months, he refused to accept any of the plea deals offered to him while continuing to profess his innocence.

On Tuesday his case was dismissed.  After court, he talked to KGNU about the how he dealt with being charged, being in jail, and undergoing months of stress that changed his life.