SAN FRANCISCO-In continuing KGNU coverage of the human rights crisis in Honduras, The Early Morning News reports on a San Francisco protest that took place against the Seasteading Institute’s promotion of Charter Cities in Honduras.  “Seasteading,” a play on the term “homesteading” is a group that intends to construct floating cities in the sea and Honduras is one location that the group is eyeing.  The event was held in the high-rent SOMA (South of Market) district at the high end “co-work space” called Galvanize, a location that protesters juxtaposed with the poverty conditions of some of the areas at risk for a Honduran land grab by outside corporations.

Other groups in addition to other countries have their eyes on Honduras as well.  Many say that Honduras is being sold to the highest bidder by a corrupt government- a government that is in the spotlight now having been exposed for using stolen money from the social security fund to finance a presidential campaign.  Thousands have since taken to the streets to call for the president’s resignation.

Last Monday, after The Early Morning News broadcast the Seasteading Institute held a panel forum attempting to describe to the public the group’s intentions about what is now termed ZEDEs also known as Charter Cities.  These are corporate zones within the country, but not affiliated with Honduras in terms of national laws, national government, national security, even national currency.  These corporate takeovers in Honduras have meant that already occupied land-usually by centuries old indigenous communities-has been subject to confiscation that has led to the forced dislocation of entire communities.

Upon first announcement of the San Francisco event, current Honduran president Juan Orlando Hernandez was listed as a speaker.  Hernandez actively promotes ZEDES in the country.

Seemingly odd to activists, Hernandez’ appearance was withdrawn and his Chief of Staff Ebal Diaz was announced as his replacement.  Further strange was the subsequent announcement of the withdrawal of his Chief of Staff.   This lead activists to question the reasons for this failure to appear especially after President Hernandez denied in a press release that he was even invited to the event.

KGNU reports from the California event.  We hear the voices of those who are from Honduras and now live in California and speak about their opposition to the land grab:

KGNU listeners have heard before from Mark Sullivan of the National Lawyers Guild.  He was a member of a delegation that KGNU accompanied in May of 2014.  That month, KGNU entered into communities that had been affected by ZEDE proposals and were told by communities that their land would be sold out from under them, some because of the development location itself and some to make room for roads that would lead to the new development.

One of the affected communities that KGNU entered in May of 2014 was Zacate Grande in the southern part of the country.   The community is at risk for refusing to give up their land.  Here activists not only have received death threats but have suffered violent attempts on their lives.  Miguel Angel is one.  He has received “protective measures” from the Inter-American Commission on Human Rights (IACHR) but has had attempts on his life on two different occasions.  He survived both.

Roxana is from Zacate Grande also and she too has received protections from the IACHR.  She spoke to KGNU last month in the city of Progreso about the ZEDE threat to her community and how little has changed since we first met in May of 2014,

“The situation in Zacate Grande is the same or worse.  It’s been over the past year that the situation has intensified.  The situation with the charter cities is affecting us much more because the communities are subject to eviction.  Supposedly the land will be sold or expropriated where the ZEDEs will be constructed.  And we are affected because the buyers will be the rich since they will be given the land titles.  Already, people are showing up from all parts to lay claim to the land.   And the people will suffer the consequences.  In one community, Pintayer, already they have been told that they will be evicted from their land and that their land title will be invalidated.

So this is the story with the ZEDEs.  New owners are appearing from everywhere so that they can sell the territory.”

Bay area organizations protest on June 8, 2015  and work in solidarity with Honduran communities who are under threat of losing their land and their lives: 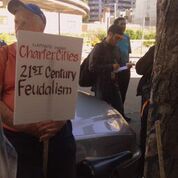 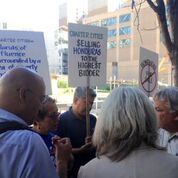 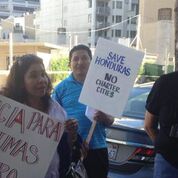 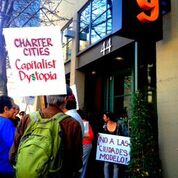 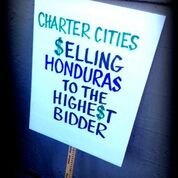 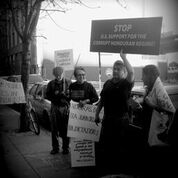 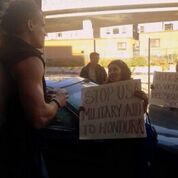 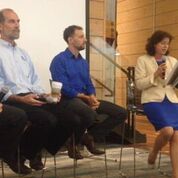