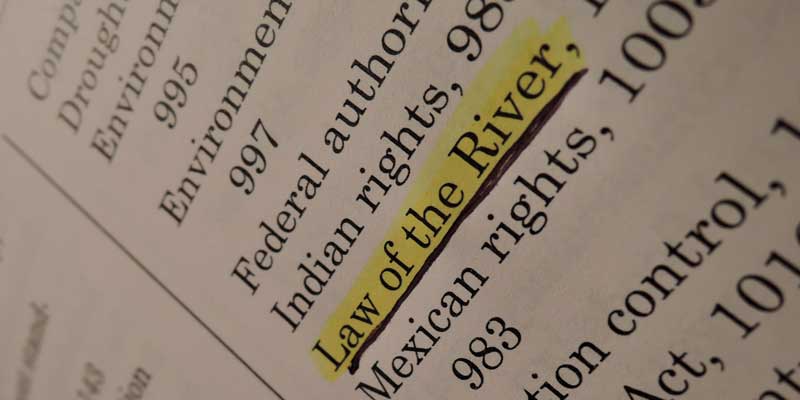 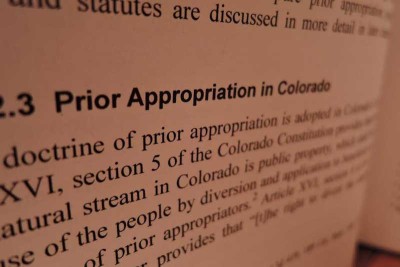 It didn’t take long after the discovery of The Colorado River for man to begin writing law dividing it up for use. For nearly a century, layer upon layer of laws and agreements have created a legal framework for how The Colorado River is controlled and allocated. All those bits of law combined is called The Law of the River. In this episode of Stories of the River KGNU’s Hannah Leigh Myers explains the unique legal guidelines that govern the Colorado; Laws that although appearing rigid and complex, are currently in a state of flux as the result of changing times and water crisis.

Around 40 million people and thousands of species in the United States are directly dependent on the Colorado River, but this dependence is pushing the river to the brink of collapse.

This lifeblood resource to the southwest is under strict legal control but it might come as a surprise to hear that legal contractual agreements have allowed the Colorado River to face collapse.

Doug Kenny,  Western Water Policy Program Director at the University of Colorado Law School says the underlying issue is simple “this is just a question of more was promised than is available. So, how do you deal with that?”

Kenny is referencing the 1922 Colorado River Compact; an agreement that some might call the backbone of the Law of the River. The Colorado River Compact divides use of the resource between seven states and Mexico. It also separates the watershed into upper and lower basins, allocating 7.5 million acre feet of water to each side of the basin. But as Kenny says, the twenty years of data used in Colorado River Compact to divide up that water was flawed.   “Well it turns out that those twenty years they had records for was twenty of the wettest years in the rivers history.”

Not long after the Compact was written the error was discovered and all parties had to accept that there simply isn’t enough water in the entire Colorado River basin to provide the flows that they’d been promised.  Doug Kenny says he agrees with the majority of water experts and legislators that the states should address the Colorado River Compact’s flawed over-allocation out of court. Kenny says if the states sue each other for more water rights the U.S. Supreme Court will be responsible for reallocating water from the Colorado River.  “The Supreme Court doesn’t have a particularly good track record with dealing with inner state water issues. It’s more of a technical challenge than the court is really set up to deal with.” 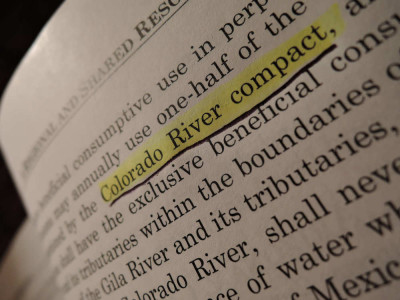 If one or all of the 7 basin states decided to reopen and change the Colorado River Compact Congressional approval is required. Ken Neubecker, Executive Director of the Western Rivers Institute says most of the basin states are hesitant to put the fate of the Colorado River in the hands of a Congress that’s seen a significant shift in power since the Compact was signed in the 20s.  “Colorado only has only 7 people in Congress and we have the biggest number of all the upper basin states. California has 55, I believe… 54 congressman. And since any reopening of the compact would have to have congressional approval, it’s now a little dicier.”

Colorado is home to the headwaters of this great river, and that’s part of why the state of Colorado has spent nearly a century dedicating more time to water law than any other state in the county and is the only state with an actual water court.  Ken Neubecker has experience explaining the complexities and unique qualities of Colorado water law such as our sole use of the prior appropriation system.  “The idea is the first one to get there is there to put the water to a beneficial use, to divert for a beneficial use, has the senior right. First in time, first in right. So when there is shortage the more junior rights have to step back and allow the water to flow down to the most senior right.”

Neubecker says the prior appropriation system is mostly geared towards efficiently using as much of the water as possible, making it legally difficult to keep water in the river for environmental and conservation purposes.   “There’s not that much water available for environmental needs. And when the environmental needs are placed in the prior appropriation system, as they are with the in stream flow rights, most of those rights are very junior and are the first rights to be called out.”

Conservationists are demanding more input in state water planning. Many environmental advocacy groups are critical of the State Water Plan, currently in draft form, for not emphasizing conservation and overconsumption. Other groups are exploring using a Public Trust Doctrine that would protect the river in this state. 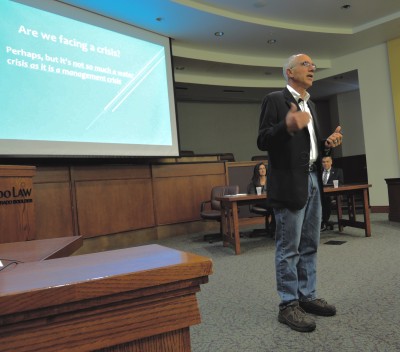 Record low levels in Lake Mead and Lake Powell could trigger a scarcity agreement as early as this summer that would limit the water being sent to the lower basin states. At an Environmental Law Society event in April of 2015 Mark Squillace, professor of law and director of the Natural Resources Law Center at the University of Colorado told the audience we need to change the way we think about management of the Colorado River.  “If we’re really interested in managing this things as one piece, which it is, then it seems to me that we’ve got…there’s got to be better cooperation where people don’t just act out of their own individual self interest  but we think what’s best for the whole”

The details of Colorado River law can appear complicated but the central issue underpinning it all is simple. There’s not enough water. Water managers and conservationists across the state are hoping to engage the public in finding solutions to this crisis those solutions may also be simple, using less and conserving more of this dwindling resource.