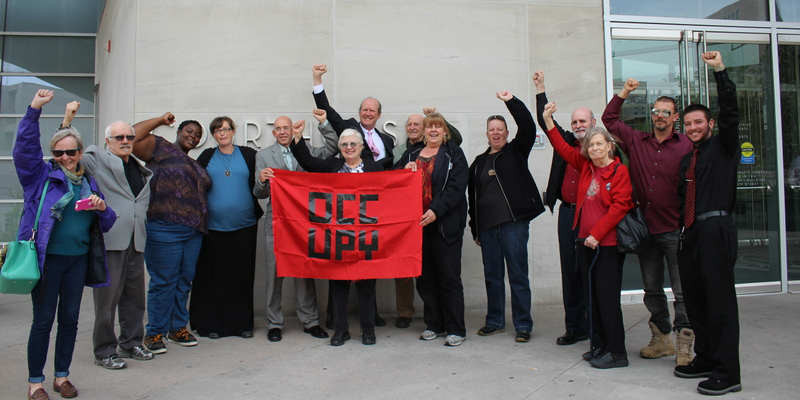 A trial that was seen as a challenge to the free speech provision of the First Amendment has resulted in the dis-empowerment of the amendment yesterday according to defense attorney David Lane, the defendants, and courtroom observers.  The Tattered Cover 5 who were arrested or ticketed for a misdemeanor disturbing the peace charge last year were handed down mixed verdicts yesterday from a 6-member jury.  The group has been holding a protest and community meal outside of the Tattered Cover Bookstore for the past several months over the establishment’s refusal to denounce a May 2012 Denver city council ban on camping-also referred to as the Urban Camping Ban-whether sleeping, eating, or resting outside using protective covering such as a blanket, tarp, or cardboard.  Owner of the bookstore, Joyce Meskis had refused to oppose the ordinance saying that the business did not involve itself in political issues while others argue that the business is a member of the American Civil Liberties Union (ACLU) an organization that defends civil and human rights through litigation.

Similar successful protests had taken place last year outside of the Snooze Eateries and then later the Palm Restaurant-in addition to the bookstore, all members of the Downtown Denver Partnership (DPP)-after protesters convinced these two businesses to revoke their support for the Urban Camping Ban.  Before the ban’s adoption members of the DDP lobbied city council by contributing to the language of the ordinance.  The ban adopted at a May 14, 2012 city council meeting was highly opposed by city council members Robin Kniech, Paul Lopez, and Susan Shephard as well as human and civil rights groups and was heavily attended by opposition who filled the council chambers and overflow rooms, some wearing dollar bills taped to their mouths.  Advocates for the homeless community have since undertaken actions such as city council appearances, protests, lobbying, and the introduction of HB 1264 that sought to declare a Homeless Bill of Rights.  The bill failed last week upon third reading.

Other actions included an occupation of the annual Sports Authority SNIAGRAB (BARGAINS spelled backwards) sale that encouraged shoppers to camp outside of their store in order to greet the store’s opening in the morning.  Homeless advocates pointed to selective enforcement and held an encampment outside of the store in what they termed SSENSSELEMOH (HOMELESSNESS spelled backwards) poking fun at the name but also intending to send a message to city council about unequal enforcement.

In a courtroom packed with supporters all three days of the trial, the message by prosecution attorneys Daniel Douglas and Chris Gaddis was that the two neighbors who complained, Marcia Polas and Christine Boyd, should have the right to peace in their homes, “a person should have the right to enjoy their homes where they feel safe and have the freedom to do whatever they want.”  But activist Lana Kirby responded to that comment saying, “People just don’t get it.  We are here for people who don’t have a home to enjoy and are extremely unsafe out in the streets.”  The appearance of one of the neighbors as a witness for the prosecution shocked activists who said that she had actually joined them during the protests at Tattered Cover and had accepted food from them at their community meal.

Positioned in the courtroom were seven sheriffs, the presence to whom defense attorney David Lane protested to Judge Beth A. Faragher, “In all the years that I have been practicing law, I’ve never seen a police presence like this!” as he continued, “This is the repression that the defendants are trying to demonstrate.”

During the verdict reading a courtroom observer who walked into the courtroom late, apparently was seen using his cell phone after which two sheriffs ordered him to leave the courtroom.  When he didn’t he was arrested in handcuffs and moved out of the courtroom as he handed his phone to another courtroom observer.  As the sheriff ordered the second observer to hand over the phone, attorney David Lane announced, “A law enforcement officer cannot take your phone.”  David Hughes was arrested and booked into the Denver jail and was expected to be released midday today although charges were not clear by production time.

Attorney for the activists David Lane said that the guilty verdicts will be appealed.

Protests and community meal outside the Tattered Cover last year:

Eric Verlo protests the Denver City Council vote to approve the Urban Camping Ban on May 12,2012