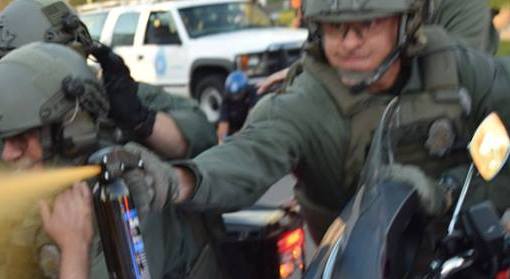 Today the mothers of four children who were pepper sprayed at Wednesday’s Solidarity with Baltimore Rally by members of the Denver Police Department have filed complaints with the Office of the Independent Monitor (OIM).  Although both expressed hesitation with giving testimony to the Internal Affairs Bureau (IAB)-an arm of the police department-the mothers expressed confidence that the OIM-that oversees a Citizen’s Oversight Board-would oversee their cases in a non-biased fashion.   “I don’t support police policing themselves” asserted the mother (whose name she wanted withheld for fear of police retaliation) of one of the children who was pepper sprayed by Denver Police about interviewing for an investigation by the IAB Sargeant Brian Cotter.   In videos posted to Youtube and Facebook her child can be seen falling to the ground screaming as protesters rushed to his aid to apply a solution and milk to his face to minimize the pain, “The IAB seemed only concerned with getting names of protesters and not about the violence committed against the families who were there exercising their First Amendment rights to support other families of police violence.”

Across the country marches have broken out, and in Denver about 100 people marched on Tuesday and then again on Wednesday in support of the family of Freddie Gray (25) of Baltimore who was killed in police custody after he was arrested on April 12, 2015.  He died a week later after suffering a spinal cord injury reportedly upon transport in the police van.  Marilyn J. Mosby, the state’s attorney for Baltimore, said that Freddie Gray’s arrest was illegal and that officers ignored Gray’s pleas for medical attention.  All six officers in that case have received charges ranging from involuntary manslaughter to second-degree murder along with others.

Both mothers said that they were on the grass or on the sidewalk on Broadway Street in downtown Denver as police approached and reached over to be able to pepper spray the crowd indiscriminately multiple times.  “This was an act of offense and not a defensive move by police.  Nothing that the crowd did was violent.  Police on the other hand drove into the marcher’s banner, ran over a protester’s foot.”

“The IAB officer who took our statements seemed very interested in putting words into our mouths and used suggestive words that we didn’t even say to coerce my son to give up names of other protesters,” said Vicki Trujillo, the mother of three of the children who were sprayed.   One of my children has disabilities and another has asthma and the police’s actions only made it worse.   I want them held accountable for what they did,” said Trujillo whose father was beaten by police in 1977 but survived and whose husband was killed by Denver Police in 2006.  In an earlier interview with KGNU Trujillo said, “I never stood up before when it happened to my family but I no longer am going to remain silent.”

Trujillo said that during Wednesday’s incident on Broadway, “a man was hovering over me and my children and I didn’t understand why he was doing that until a motorcycle cop came and hit the side of my leg with the tire.  If that man hadn’t done what he did, my son would have gotten hit.”

Both mothers said that police used unnecessary, excessive force.  Trujillo affirmed, “They all dropped their bikes at the same time and the ones in the SUVs ran towards the crowd.  They snatched up the first couple of black people they seen.  They slammed the girl on the ground.  It was very scary.   They started spraying their pepper spray right away.  We witnessed them grab a young black man and that man [said] ‘I’m not doing nothing.’  The force of the way they did him, they had his arms bent all the way back.  One was stepping on his butt.  Once [the man] sat up, the officer was already this close.  He was already restrained.  He was already sitting down yet [the officer] sprayed him [then] turned around and sprayed the crowd.”

Trujillo reported the need to seek medical attention for her children the next day,

“My son hasn’t needed an inhaler.   He’s been doing good with his asthma.  You could hear the excessiveness of his coughing.  They’re having congestion problems.  My son got new prescriptions for inhalers.  My special needs kid fell.  He threw up.  My little one was so terrified and crying.  My younger son asked another cop, ‘Why are you hurting us’ and the cop responded, ‘I don’t have time to focus on you’ and rolled the window up laughing at my son.

To witness another 13-year-old get sprayed in the face, screaming, was horrifying for kids to be seeing that.  [The march] was peaceful.   We didn’t have weapons, we didn’t have anything.  We didn’t toss nothing at the cops.  We didn’t provoke them.  They dropped their bikes and attacked us.

To see our kids crying and not be able to protect them the way we were supposed to, it hurts.  And I feel [the police] need to be accountable for what they do.

I would never put my kids in danger.  It’s never happened to us like this.  To be this close up to us and then [spray us].  That was really unfair to us and I feel really bad for my children.

Most of the time [cops] cover their badges.  They don’t give their numbers.  We ask them.  They don’t tell us.  When they see us recording, they step in front of the cameras.  And that’s our right.  And they are basically saying, we don’t have our First Amendment.  Or they’re trying not to let us see what they’re doing to people because when they have somebody apprehended, they right away surround them and they’re not letting us record what is going on.

I see things on the media and it breaks my heart and I’m like, I was there.  This didn’t happen.

I feel my kids have every right to know what’s going on in the world.  My kids are not stupid.   They know that the system is the way it is.”

The mother of the other child described the scene:

“Pepper spray (or whatever they were spraying that was orange) was coming everywhere.   I grabbed my son to run (because I saw the spray) to get him out of there and he started screaming.  ‘I’ve got it in my eyes!  I’ve got it in my eyes!’  Of course I got pepper-sprayed too.  I have no idea why a police officer would have total disregard for everyone around them.  I was trying to get my son as far away as possible and get him medical attention.

I saw somebody getting thrown down to the ground and get arrested.  He was black.  The Denver Police target people of color.”

She went on to describe the events that followed, “The police officer is spraying like this, from left to right and right to left.   I did see a police officer at one point lunging and going like this, straight into someone’s eyes.   I don’t know why a police officer would lunge at someone because to me, that’s offensive, not defensive.   I think the police have total disregard for public safety.  My son does not trust the police and after an incident like this, he’s not going to trust them even more.  He’s probably going to run from them, which thankfully because he’s white, won’t get him shot.

I would love to be able to trust the police.  And I can’t even do it.  But my son knows.  If anything goes wrong, if there’s any other adult, that’s who he goes to [for help].  Because he can’t trust the police.  Look what happens when people call the police here.  Their kids get killed.  I don’t want my son dead.”

She went on to say that she kept her son home from school the next day with a fever after what she believed were the effects of the pepper spray, “He didn’t have the fever going into the march.”

When asked what results she would like to see from her complaint, she said that she would like to make sure that officers are drug tested for steroids, that these officers would have desk jobs because, “I don’t think the officers [who were] there can be around people. “