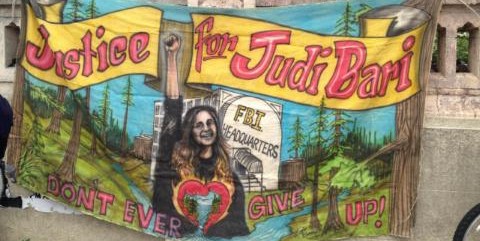 OAKLAND-On KGNU’s morning magazine we heard the account of Boulder resident Betty Ball who worked alongside Judi Bari and Darryl Cherney to protect the redwood forests of northern California in the 1980s and 90s. May 24 was dedicated Judi Bari Day in Oakland and events were held to remember the Earth First activist who was severely injured after a bomb exploded under the seat of her car.  Those who worked with her at the time believed that she was targeted for assassination because she challenged big corporations who were profiting in the timber industry.  KGNU’s California correspondent went to the Oakland event to speak to friends of Judy Bari who turned out for the 25 year commemoration of her life, some of whom have been turning out for each of the 25 years of commemorations.