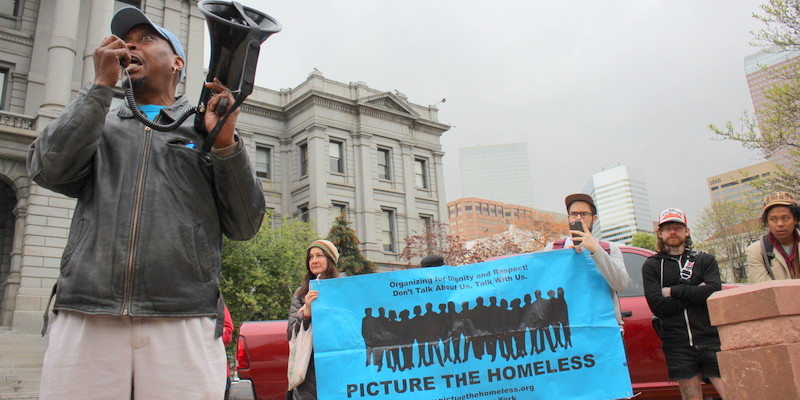 Continuing from an April 15th State, Veterans, and Military Affairs Committee hearing that did not conclude, HB 1264 was heard again yesterday at the State House.  Also known as the Right to Rest Act, the bill’s sponsors said that it sought to decriminalize basic human needs.

Dozens of supporters from as far away as Australia and in the US Florida, Illinois, and New York met outside of the Capitol prior to the hearing.  Co-sponsor of the bill, Representative Joe Salazar said that current municipalities are appeasing businesses and corporations “in the same way that in the past when businesses used to say they couldn’t conduct business if a black person sat at the counter.”

Following earlier testimony that outlined sexual assault on the street, unavailability of services, police lack of training, and the criminalization of those who have been ticketed for resting, eating, or sitting in public places, the house committee was not moved to support the bill.  The Homeless Bill of Rights or the Right to Rest Act failed 3 to 8.

Although no other testimony was allowed from those who were not signed up by the April 15th hearing Kathy Haddock, senior assistant city attorney for Boulder was allowed to testify representing the city despite extensive public testimony in protest at last Tuesday’s city council meeting.  Haddock said that the city spends millions, that Boulder attracts the homeless, and that the city wants to maintain local control.

After the vote, those who worked for the bill and supporters could be seen crying as they exited the room.  Others responded directly to the committee, “Where’s your humanity?”

Representative Salazar responded to the group that he would bring the bill back next year as did Representative Jovan Melton, also a sponsor of the bill.