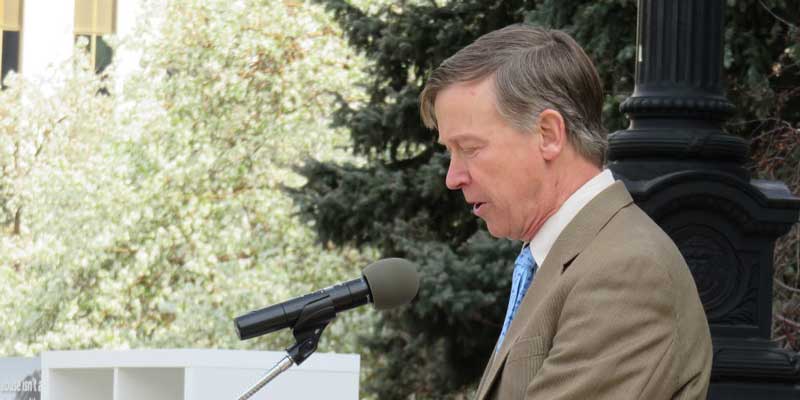 Child advocates gathered at the state capitol on Tuesday/today to help the Governor officially kick off child abuse prevention month. As Bente Birkeland reports, this comes as lawmakers are discussing several changes to how the state protects children from abuse and neglect..

In the wake of a 2014 audit that was critical of the Colorado Department of Human Services, the state legislature is grappling with how much money to add for child welfare case workers and the best way to track whether the overall system is taking care of abused and neglected children.

“In government our highest obligation is to make sure we keep children safe,” said Governor John Hickenlooper. Child advocates joined Hickenlooper at the state capitol on Tuesday to help kick of national child abuse prevention month.

“I think it’s going to be incremental improvement rather than one giant step,” said Hickenlooper.

To that end, the state budget has included money for 100 new caseworkers, but some lawmakers said that’s not enough. “When the audit says you’re between 600-800 workers short, that’s not a sufficient down payment, so we need to push harder,” said Representative Jonathan Singer (D- Longmont). As a former caseworker himself, Singer said he knows the challenges firsthand.

“I was the one taking kids out of homes, or finding ways to make sure they could stay in homes,” said Singer.

The budget has already cleared the Senate, and the House will debate it this week, leaving one more opportunity to add more money into child welfare programs.

And on Tuesday, the Colorado Senate initially approved senate bill 204 to try and provide additional oversight over the child welfare system. It aims to make the state’s office of the child protection ombudsman more autonomous. Currently the ombudsman office operates within the Department of Human Services.

“For them to truly perform the duties we assign to them, they should not be under the management, or supervision, or budget control of the agency for which they’re the watchdog for,” said Senator Pat Steadman (D-Denver).

The proposal would move the office under the authority of the state auditor.

“It will put us on the path towards finding the solutions in an independent fashion,” said Senator Kevin Lundberg, (R-Berthoud) a main sponsor of the legislation.

But while the measure has broad support from lawmakers in both parties, the Governor said thinks there could be concerns when you have the office managed by a committee, for instance the legislative audit committee.

“I’m not instinctively against it, we all want to make sure we have independent accounting and do everything we can in cases of abuse and neglect,” said Hickenlooper.