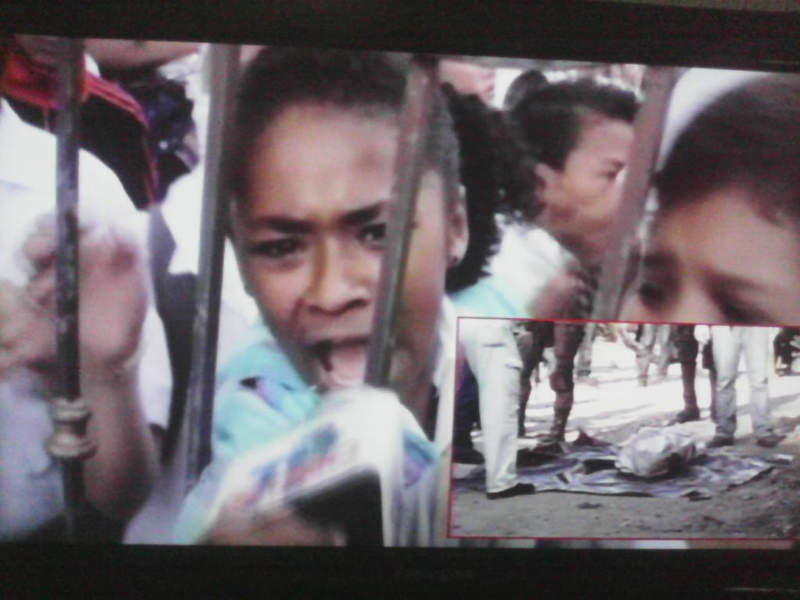 Four young students have been assassinated and another two have been shot in an education crisis that has led a country of students into the streets. On Monday, March 16, 2015 in the capital Tegucigalpa, in San Pedro Sula, and Intibuca, students demanded that the Ministry of Education, Marlon Escoto retract his directive to extend class times to 7 pm.  In a country with the highest homicide rate in the hemisphere, students cite the danger of returning home after dark.

Low income students who must work days and attend night classes are protesting the elimination of night classes that will exclude them from the public education system.  In San Pedro Sula, the teacher’s schools have been shut down forcing students in this discipline to pay for their education or travel to larger cities to study.  The students have also protested the lack of student financial assistance, teacher materials, and school furniture such as desks.

During protests in Tegucigalpa, student protesters at the National Autonomous University of Honduras were gassed, beaten and detained by police and school security guards who also took their pictures.  Because it is believed that students whose faces were exposed by media at previous protests were the same ones who were killed, students who are in the streets now, cover their faces.

Those killed were identified as Soad Nicolle Ham Bustillo (age 13 or 14), Elvin Antonio Lopez (19), Darwin Josue Martinez (21), and Diana Yareli Montoya. The 13-year old girl was last seen leaving home to go to school. Her body was found wrapped in a sheet and dumped on the streets of the capital Tegucigalpa.

Mainstream media is attributing her murder to common crime.  Karen Spring has been a human rights observer in the country since the 2009 military coup. She said that the general public does not accept that explanation, the story of which is a common attempt to cover up government or police involvement.

In a related incident, on March 26th at 4am, Military Police of Public Order illegally entered the home of Nery Gomez, a member of a student movement and confiscated his personal documents.  Gomez had not been sleeping in his home out of fear of such an incident.  It is common for activists in Honduras to sleep in different places each night for their safety.

In the following footage of the protests provided by Spring to KGNU, we hear one speaker say, “It’s necessary to be conscious of what’s happening here: The criminalization of both high school and university students.”  Another begins by saying, “We are making a direct call” at which point he points to the police and says, “and I can see those bastards taking my picture” and at another point the entire crowd yelling to police “assassins, assassins!”

Former President Mel Zelaya (in cowboy hat) who was ousted in a 2009 US backed military coup appears at a rally in support of the student movement.