Stories of the River is a new series on KGNU supported by T.E.G highlighting the Colorado river. The first episode looks at the geography of the river, from its origins high up in the Rocky Mountains to the Golf of California where the river no longer reaches due to over use. Hannah Leigh Myers reports.

A Profile of the Colorado River Watershed

“The Colorado is six inches wide and about one foot deep and it’s just meandering through this wet meadow, that’s the Colorado, that’s the same river that carved or helped carve the Grand Canyon.”

But the geography of the river is in many ways its downfall. Over the course of its 12-hundred mile journey from its origins in the Rocky Mountains to its final destination in the Gulf of California, seven states and a part of Mexico draw so much water from the Colorado that the river no longer reaches the sea.

Douglas Kenny, Program Director for the Western Water Policy Program at University of Colorado estimates that roughly two thirds of the Colorado River is used for agriculture and most of the rest is used by cities.

“ You know some people just see that as efficiently using a resource and if you view the Colorado as a plumbing system, as a water supply, then I guess that’s efficient. If you view it as a river, you know a living, breathing, important entity then the fact that it doesn’t reach the ocean I think is a problem. And that problem has existed for close to half a century now”

And the problem is many of those people live outside the Colorado River Basin and are pulling water from the river with no way to return any of the water to the source environment.

Both watershed and river basin are terms to define an area where all the water gathers in a central lowland area, like a riverbed or lake. But Kenny says that removing water from the river and from the basin is pushing the Colorado to collapse. “I often tell my water law class that we are one bad year from crisis on the Colorado River.”

Mark Squillace, director of the Natural Resources Law Center in Boulder says that no river in the American West is more controlled by dams and reservoirs, pipe systems and hydro-power facilities than the Colorado. He points to reservoirs that divert water for use downstream as an indicator of the looming risk of severe drought

“The main reservoirs on the River, there are a lot of them, but the two main reservoirs, Lake Mead and Lake Powell, are both well below 50 percent right now. We’re clearly in trouble on the Colorado river and the system that supplies water to various users.”

Back at the source of the river, high in the Rocky Mountains, Mark McCutcheon, District Ranger with the Rocky Mountain National Park pays homage to the mighty Colorado’s headwaters right beneath his feet with a bow.

“It’s a special place in the American West”

McCuthcheon says he’s confident that increased public knowledge on the Colorado’s function and geography is one of the best ways to protect this irreplaceable natural resource.  He is hopeful that in the future water originating here at the source in Colorado will ultimately reach the sea in the Gulf of California.

“It is very important for American society, to know and understand how they get their water and how water works and how drainages work. Especially in arid American West.” 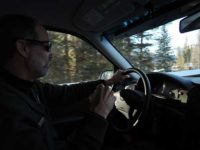 Headwaters of the Colorado River in Rocky Mountain National Park