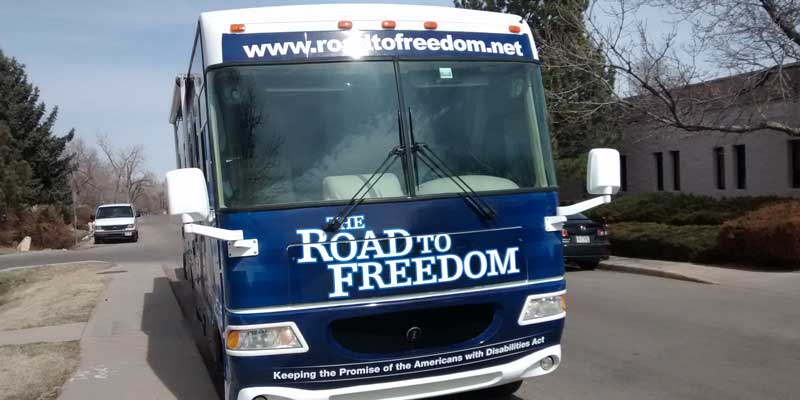 “This was a time when we wanted to be included.”

Tom Olin is driving a bus across the country to commemorate the signing of the Americans with Disabilities Act in 1990.

Olin’s ADA 25th year legacy tour stopped at the Center for People with Disabilities in Boulder on Friday March 13th.  Olin was part of the Atlantis community in Denver that was founded by former nursing home residents who were fighting for the right to live independently in the community. Olin says those young disabled activists fought hard for that and other civil rights.

Larry Ruiz was part of the Gang of 19 in Denver, all members of the Atlantis community who in 1978 blocked an RTD bus in downtown Denver to raise awareness about the need for access to transportation.  Larry Ruiz died in 2012 but shared his life story with KGNU on the 20th anniversary of the ADA.

This July marks the 25th anniversary of. The ADA is a wide-ranging civil rights law that prohibits discrimination based on disability.  It covers employment, access to public transportation, housing and education.  But disability rights advocates say that more awareness needs to happen in society about the needs of the disabled community. The ADA 25th year legacy bus tour will arrive in Washington DC in July for the official 25th anniversary celebrations.

The tour stopped in Boulder on Friday March 13th at the Center for People With Disabilities.

Joy Weber from North Carolina was onboard she says she experienced first-hand life before the Americans with Disabilities Act, particularly when it came to accessing education. She shared the story of her husband, a fellow polio survivor who had to fight to get his college degree.

“His mother came and sat in her car all day long because there was not a bathroom he could use on campus for 6 years at an architectural school in North Carolina. If he had to go to the bathroom while he was on campus, he put his wheelchair in the car and went back to their trailer and used the bathroom and then came back to school.”

One of the major barriers facing people with disabilities is employment. The Department of Labor estimates that 17.6% of persons with a disability were employed in 2014 compared to 64% of people without a disability being employed.

Bonnie McIntosh Is a Boulder resident has experienced this first hand.  She has been unemployed since she was laid off in 2012. “If you have a disability, it’s hard to get out there because some employers don’t want to take the risk.”