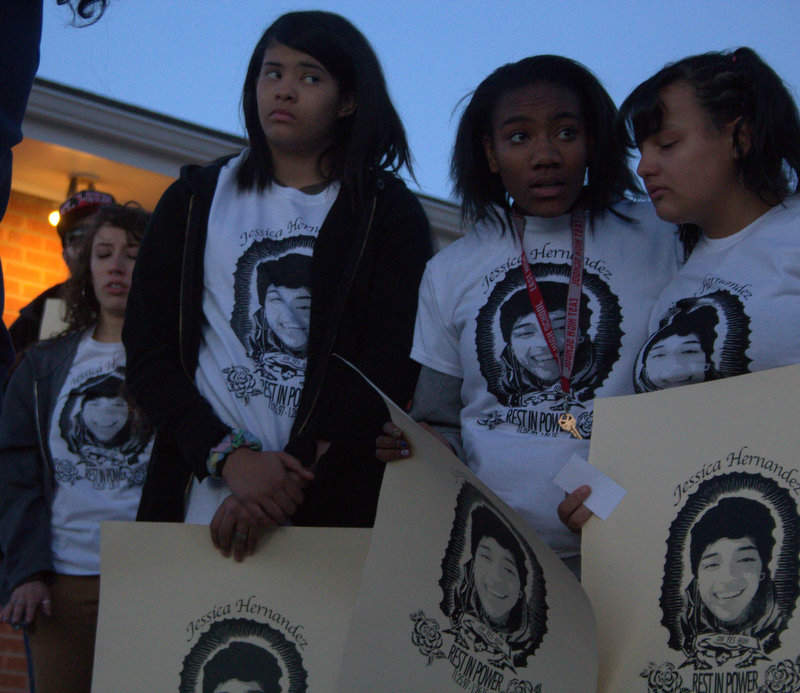 Right now in Denver and indeed across the nation, communities are mourning the loss of 17-year old Jessica Hernandez who was shot by Denver Police on January 26th.

Still experiencing trauma, youth, people of color, the LGBT community, and many others have held events from vigils, to press conferences, to marches, to nonviolent direct actions in order to hold law enforcement accountable for her killing and for the killing of other unarmed people of color who lost their lives in similar circumstances in recent months.

On February 19th, one such vigil took place at the corner of 26th and Newport in Denver near where Jessica was killed, and then a memorial procession to the exact spot where she was shot to death.  Here a memorial of flowers, candles, pictures, signs, and teddy bears adorn an altar that pays tribute to the young teen.  The neighbors on the block have tended to the memorial since its inception as mourners add to it every day.

But Just before the vigil, Cecelia Kluding member of the group Branching Seedz of Resistance spent the afternoon with Jessica Hernandez’ parents Laura Rosales and Jose Hernandez to let them know of the vigil and to assess the needs of the family.  We first hear Cecelia Kluding’s account of the time with Jessica’s parents and then we move to the vigil itself where Mimi Madrid, also an organizer with Branching Seedz of Resistance and Cecelia Kluding spoke along with other participants, including members of Jessica Hernandez’ family.