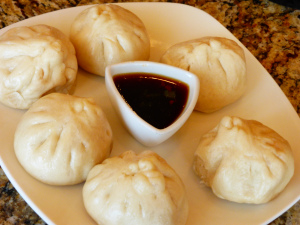 By John Lehndorff, originally posted on his blog.

(Dec. 26, 2014) – Tired of trying to figure out what’s hot and what’s not in the food and beverage world? As a service I have collected everybody else’s 2015 eat and drink predictions thereby avoiding having to make any predictions of my own except that bao and Filipino fare will be huge and my obligatory “Pie will be big in 2015.” Right. Let’s all check back here in a year and see whether any or all of these predictions (aggregated with credit from diverse aggregating e-newsletters including Smartbrief come true. It leads us to speculate whether in fact there ever any new trends at all except trends borrowed from other people or simply made up by people like me.

“Restaurant concepts set to take off in 2015 include single-food concepts, distilleries that serve food and all-tech restaurants that allow customers to use electronics to order and pay, writes Restaurant Business editor Sara Rush. The biggest trend is predicted to be butcher-restaurant hybrids where diners can eat in or purchase ingredients to prepare a meal at home. Restaurant Business (12/2014)”

* Craft brew will be big in 2015 http://www.bevindustry.com/articles/88055-craft-beer-boasts-fastest-revenue-growth-of-all-alcohol-segments*

Chefs will add more sour flavors to the menu in 2015 and experiment with uncommon vegetables like kohlrabi. Specialty pancakes are also predicted to appear on more menus next year. Chef Forest Parker of Old Village Post House in Mount Pleasant, S.C., mixes up his breakfast menu by serving chestnut flour pancakes topped with apple butter and country ham.” The Post and Courier (Charleston, S.C.)*

“Transparency will be a high priority for consumers next year, as they seek healthy foods and quality ingredients, according to a panel of fast-casual executives. “Consumers really want to know where their food is coming from and that it’s local, with as little agricultural processing as possible,” said Trufoods executive Gary Occhiogrosso. FastCasual.com”*

“Sales of natural frozen foods are poised to continue to rise in 2015, as manufacturers continue to spread the message that frozen is “nature’s pause button” and provide convenient wholesome options for families, dietitian Allison Stowell writes. Other frozen and prepared food trends to watch in 2015 include cleaner recipes, more Guiding Stars ratings and front-of-package claims that are follow nutrition trends, she writes.” Refrigerated & Frozen Foods online”

*The year of digestive wellness: http://www.foodnavigator-usa.com/Suppliers2/Weight-management-digestive-wellness-influence-food-purchases-in-2015

* “Ever since the invention of the TV dinner, consumers have expressed a desire to get out of their kitchens in less time, but there is increasing evidence that convenience is being redefined and kitchens aren’t so bad after all. In 2015 consumers’ relationships with their kitchens will continue to evolve as Millennials look for more involvement in their food preparation, multi-cultural influences grow, and “fresh” foods and meals become must-haves, according to Darren Seifer, food and beverage industry analyst at The NPD Group, a leading global information company.”

* “After-dinner and late-night snacking, functional snacks for active consumers, on-the-go breakfast options and vegetable snacks will dominate the snack category in 2015, according to a report from Datamonitor Consumer. Next year has the potential to be a strong one for the snack market, but snack makers should beware of competition from the beverage and cereal categories, said Mark Whalley, Datamonitor Consumer’s head of food and drink. BakeryAndSnacks.com (France)”

“Consumers’ “restless palate syndrome” will drive them to discover new flavors, moving beyond kale to root vegetables and seaweed and trading salsa for hummus, according to Baum + Whiteman’s annual trend forecast. The quest for new flavors will spill over onto the beverage side as well, according to the report, which also predicts a faster rise in customer-facing technology including in-store tablets and mobile applications. Restaurant-Hospitality.com”

* “Ready-to-eat popcorn, calorie counts and customer loyalty among private labels are trends to keep an eye on in 2015, according to experts from Mintel, Euromonitor, Rabobank and Trailblazer Foods. They also point to increased transparency, natural and gluten-free products, consumer indulgence and coconut products as next year’s top trends. FoodNavigator”

* “Denver is the second-fastest growing city in the country, and the Mile High City’s restaurant scene is in the midst of its own growth spurt. Top chefs including Keegan Gerhard are passing up New York City and Chicago to land in Denver, where one recent month saw 40 new eateries open. National Public Radio”

* “Fermented food, particularly pickled vegetables such as cauliflower and eggplant, will continue to rise in popularity in 2015, according to data gleaned from Urbanspoon’s dining app. Old-fashioned desserts including brittle are expected to make a gourmet comeback, and smoking techniques will migrate from behind the bar to be applied to savory vegetable dishes. HuffingtonPost.ca (Canada)/Agence France-Presse/Relaxnews”

* “2015 will see veggies appearing in unexpected places & more demand for healthy foods
By Elizabeth Crawford, 15-Dec-2014
Eating all your vegetables might be easier in 2015 than in recent years as they increasingly show up in unexpected places, including desserts and drinks, according to the International Food Network.
http://www.foodnavigator-usa.com/Markets/Veggies-will-appear-in-unexpected-places-in-2015&#8243;

* “New product launches are increasingly including claims of non-GMO, Kosher, gluten-free, vegan, lactose-free and environmentally-friendly production, as these foods gain popularity in the mainstream U.S. market, according to Mintel’s Global New Products Database. Labels with all-natural, antioxidant and low, no or reduced levels of sugar, sodium and fat have plateaued in the past six years. FoodNavigator”