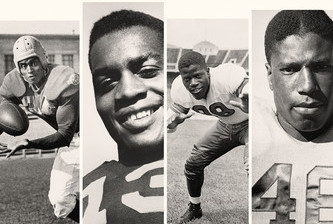 When most people think about the integration of professional sports in the United States their minds immediately go to Jackie Robinson, who broke Major League Baseball’s color line in 1947 with the Brooklyn Dodgers. But very few are aware that the year before, in 1946, four African-American football players, Kenny Washington, Woody Strode, Bill Willis and Marion Motley, toppled a similar racist policy in their sport. Josh Chetwynd discusses this under-appreciated historic event with Ross Greenburg, executive producer of a documentary on the subject called “Forgotten Four: The Integration of Professional Football,” which will debut on the Epix Channel on September 23.