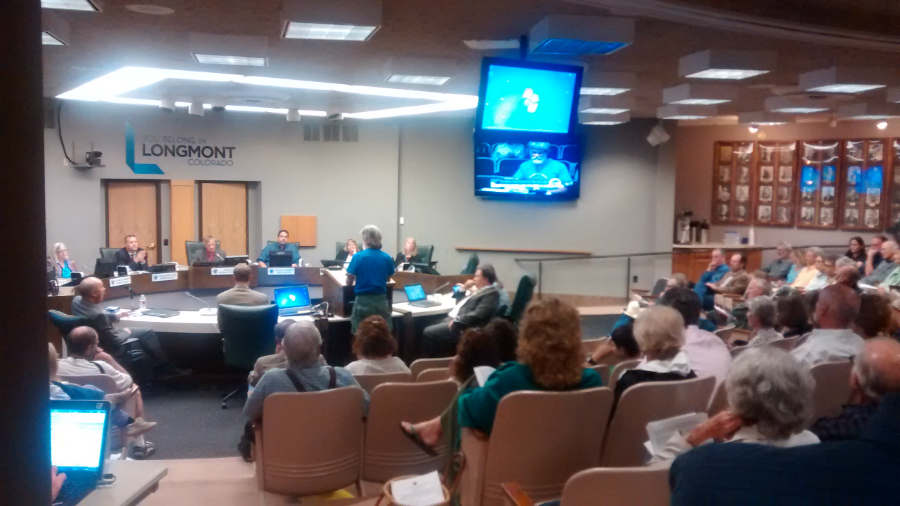 The Longmont City Council received cheers and a standing ovation after they unanimously voted to continue to defend the city’s fracking ban in the courts. In July Boulder District Judge D.D. Mallard ruled that Longmont had no right to ban fracking within its city limits.  Judge Mallard said that state law which allows fracking has precedent over the city’s charter. Tuesday’s city council meeting was to decide whether to appeal that ruling. Councilwoman Bonnie Finley introduced a motion to support an appeal saying that there was a need for clarity on the issue and that the council should be ready to go all the way to the Colorado Supreme Court if needed. Councilwoman Finley also said that Longmont should seek out other communities to work with in the fight around local control of fracking.

Kaye Fissinger was one of the many members of the public who testified in advance of the vote, urging the council to pursue the appeal. Fissinger is with Our Longmont the citizen group behind the successful fracking ban ballot measure.

At the heart of the suit is whether Article XIV of Longmont’s home rule charter is valid..that is the segment that bans fracking in the city. Members of the Boulder County Community Rights Network attended last nights council meeting…they are seeking to get a county wide ballot initiative that would make the entire Boulder county home rule. Mary Smith with BCCRN said she was encouraged by last nights city council vote.