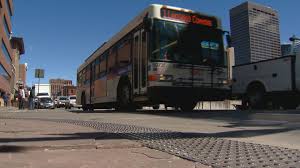 On July 5th & 6th, 1978 a group of disability rights activists staged a protest against RTD in Denver by surrounding two inaccessible buses at the corner of Colfax & Broadway in wheelchairs.
They stayed for 24 hours, even sleeping in the street. Many more demonstrations followed, in Denver and across the country, and ultimately their actions lead to the passage of the Americans with Disabilities act.

Those original activists in Denver became known as the gang of 19 and included Larry Ruiz who was born with cerebral palsy. Ruiz died in 2012.

Listen to Larry Ruiz share his life story with KGNU as he spoke through a voice machine.


Despite Denver’s role in disability access on public transit, there are ongoing issues in this area. A recent lawsuit involving the he Regional Transportation District and the Colorado Cross-Disability Coalition over access has lead to some changes on the buses. Scott Reed with RTD says the transit service is partnering with the CCDC to hold an informational open house for people to learn more about disability rights and how all of RTD’s users can share the ride.


The open house on disability transit access is next Wednesday August 20th from 4-6 p.m. at the Knights of Columbus Hall, 1555 Grant Street in Denver.